Kieran Marmion is looking to make the most of his opportunities in the coming weeks as Ireland gear up for their two-Test series with Japan.

The Connacht scrum-half, who made his Test debut against Argentina in June 2014, started Ireland's 55-19 victory over the US Eagles in New Jersey last Saturday and will be looking to hold off competition from Leinster half-back Luke McGrath and Ulster-bound number 9 John Cooney across the next fortnight.

With Munster's Conor Murray away on Lions duty in New Zealand, Marmion has been given a rare chance to shine and will be looking to build on his solid display in the sweltering conditions of the Red Bull Arena.

"Yeah, it's great to get that exposure," Marmion said, reflecting on his performance in the States.

"We had a good result there at the weekend. It was pretty tough conditions in the heat. It was nothing like I've experienced before, so that was challenging.

"But it was good to get that result. It was a good performance but I think we can build on it as well.

"Every start we get is an opportunity. Again, the US Eagles was a challenge but coming into these two weeks, we'll be facing a bigger challenge from Japan."

Joe Schmidt's men will face the Brave Blossoms at Ecopa Stadium in Shizuoka on Saturday before a rematch at Ajinomoto Stadium in Tokyo seven days later.

Both sides will meet again at the forthcoming 2019 World Cup, having been draw together in Pool A.

Having posted nine tries, including a first-half effort from Marmion, against the Eagles, Ireland are set for a far sterner test against Jamie Joseph's outfit. 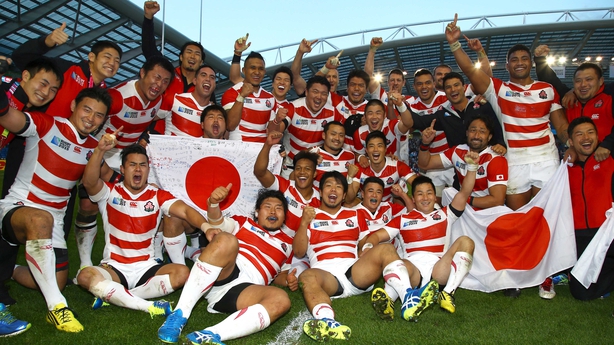 Since their superb campaign at the last World Cup, which included an unforgettable 34-32 triumph over the Springboks in Brighton, Japan have proven themselves to be more than a match for many of the top nations at Test level.

The home side warmed up for the visit of Ireland with a 33-21 win against Romania in Kumamoto last Saturday and Marmion admits there will no hint of complacency among the Irish ranks.

"Over the last few years Japan have improved hugely," he added.

After a week-long stint in New York, the Ireland squad arrived in Tokyo on Monday morning and are adapting to their new surroundings ahead of Saturday's opening Test.

There were the usual post-match initiations for the rookie quintet, but with an early-morning flight to Japan, the 31-man squad were on their best behaviour ahead of the 20-hour trip.

"The players had the usual initiations," added Marmion on Ireland's five new caps.

"They had to sing in front of the after-match reception, so that was done and then we were pretty strict because we were straight on the plane the next day so they got that done and we moved onto next week.

"We arrived on Monday. We're getting used to the time difference, which is tough, but we've settled in nicely and just had a first walk-through today."