Dan Biggar has labelled himself the British and Irish Lions' current third choice fly-half - but vowed to close the gap on Johnny Sexton and Owen Farrell.

Wales playmaker Biggar has shaken off a head-injury scare to be fit to start Tuesday's Highlanders clash in Dunedin.

The 27-year-old offered a candid assessment of his Lions status in freely accepting he currently trails Sexton and Farrell in the race for the fly-half shirt to face the All Blacks.

But the Ospreys star believes that stark openness can be his first step to clawing back ground on his fly-half rivals.

"Johnny and Owen deserve to be just a fraction ahead at the moment," said Biggar of his battle with Sexton and Farrell.

"It's going to be about what I can do for the team and hopefully that comes off.

"That is me being brutally honest. But my nature is not to want that to happen, my nature is to close that gap and put some pressure on the two of them.

"That's the chance I have on Tuesday night, but that's not my mindset. It's not going to be 'I've got to do this, this and this to put pressure on Johnny and Owen'.

"It's going to be about what I can do for the team and hopefully that comes off.

"It's not nice to be probably the third choice at the moment, for whatever you think, but my personality isn't happy with that and it's my job to try to force the order a little."

Biggar was forced out of the Lions' 22-16 loss to the Blues after failing a Head Injury Assessment (HIA), and was unable to feature in Saturday's 12-3 Crusaders victory.

The 56-cap Wales star insisted the Lions medics acted out of supreme caution, and admitted his relief at being able to return to action. 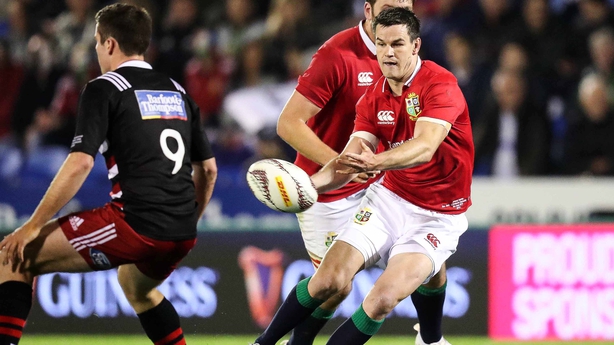 Biggar has adopted a refreshingly frank attitude to his current rank in boss Warren Gatland's perceived selection pecking-order - in a bid to push hard to catch Sexton and Farrell.

"It was one of those where it wasn't really anything, it was a glancing blow.

"The doctors made a real precautionary call. It's better to be safe than sorry but I was fine after the incident and wanted to carry on, quite forcibly, but the right decision was made.

"The day afterwards was complete rest and then some light stuff on the bike.

"Then it's non-contact running, I trained a bit on Saturday afternoon so everything's gone smoothly - there are no issues whatsoever.

"All the games we're playing at the minute are like Test matches. It's not really three Test matches on this tour, it's probably nine or 10."

Asked if being so candid on his fight for the Test shirt is the first step to claiming it, Biggar replied: "Absolutely. There's a big opportunity for everyone selected to stake a claim and the boys who played on Saturday night did a great job in terms of getting us back on track.

"That's the aim for everyone on Tuesday, to put a bit more pressure on the coaches and it's a lot easier to put pressure on them if you come out a winning team, rather than not."