The British and Irish Lions ignited their tour of New Zealand by ruthlessly ruining the Crusaders' perfect season with a potentially-priceless 12-3 victory.

Owen Farrell capped an inside-back masterclass with all the tourists' points as the Lions announced their true arrival in the Land of the Long White Cloud.

Conor Murray was also excellent in his first start of the tour, with Johnny Sexton - on after half an hour for the injured Jonathan Davies - assured and steady.

Warren Gatland's men answered all the questions and every critic with a win of substance and serious promise. 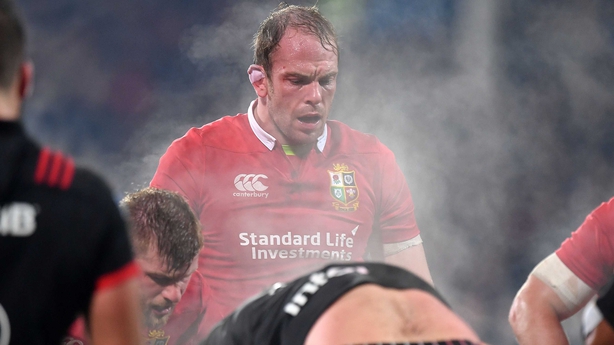 The sight of home fans leaving in their droves before full-time will have left every Lions fan sporting a smile: the rugby-mad home crowd were as unhappy in defeat as the much-vaunted Crusaders themselves.

The home crowd booed Farrell for kicking the ball out to signal the final whistle, but that will not bother the tourists one iota.

Farrell, Jamie George, George Kruis and Alun Wyn Jones all nailed down their Test match places, with Murray putting himself in the box seat for a start too.

Wednesday's disheartening 22-16 defeat to the Blues left this clash as the crux of the tour - and the Lions passed every test in style.

Steve Hansen and Eddie Jones have had plenty to say for themselves on all things Lions, from style of play to schedule constraints and commercial opportunities.

But after two patchy performances the Lions lit the touch paper on a tour that now promises to explode into life. 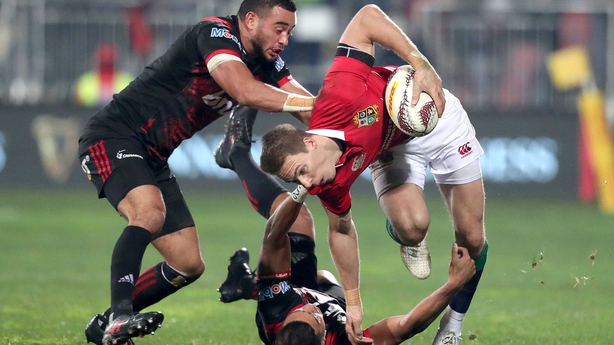 All Blacks boss Hansen and England coach Jones have both taken pops at the Lions' predicted playing style. Against the runaway Super Rugby leaders the tourists proved once again that Gatland's way will do just fine.

So strong are the All Black-laden Crusaders that they have won 14 from 14 Super Rugby matches. The Lions swatted that record aside, however, heaping another level of intrigue on the three-Test series, that starts on June 24.

Two Farrell penalties gave the Lions the early advantage, but the first half hung entirely on the Crusaders' try-line fever. The hosts rejected two routine shots at goal in favour of punting to the corner.

The TMO ruled a drive to the line "inconclusive" as to whether a try had been scored.

But then the Crusaders knocked on trying to pulverise the visiting pack in driving off the line-out.

The Lions celebrated the mini-win just the way hooker George vowed they would keep doing, ahead of the clash. The tourists know full well how annoying that is to opponents, and are quite right to keep doing it. 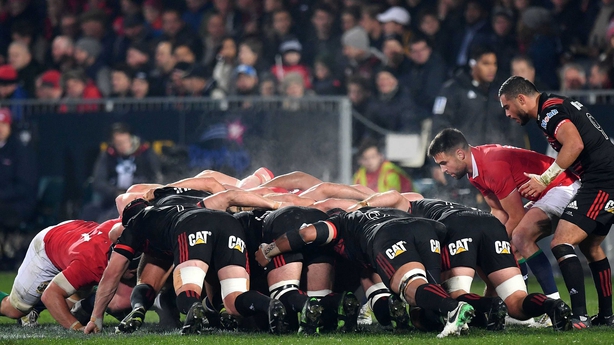 The Lions completed the successful defence of that siege by winning a penalty at the scrum, clearing the danger to ensure they took a 9-3 lead into the break, Farrell having restored their six-point advantage with his third penalty to cancel out Richie Mo'unga's kick.

Stuart Hogg lasted just 20 minutes after running face-first into Murray's elbow when chasing his own high ball, departing with a bloody nose and no little wounded pride.

Jonathan Davies looked sharp and tough, but was forced off for a Head Injury Assessment (HIA).

That paired Sexton at fly-half and Farrell at 12, and the pair looked immediately comfortable in harness.

Farrell shone constantly in a first half where the hosts were sloppy, but forever itching to counter from any distance. 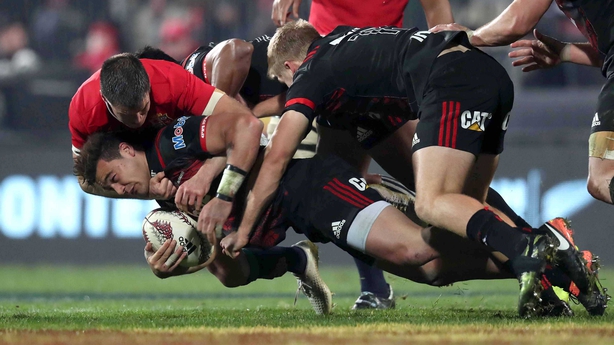 The Lions opened the second half well, but Farrell was left mystified by the touch judges refusing to raise their flags when he blasted a penalty, so he thought, through the posts.

The goal did not stand, however, and the Lions wasted another half-chance when Ben Te'o followed a fine break with a poor pass.

George Bridge knocked on with a try begging after the Crusaders bisected the Lions' 10-12 channel, and then the Lions won another big scrum penalty.

Liam Williams' knock-on cost Anthony Watson a try, the Bath flyer stepping home in style only to see the score chalked off.

Watson produced another sumptuous break as the game started to fracture, with Sexton offering smart continuity - only for replacement flanker CJ Stander to spill the ball after cutting a threatening line.

RECAP: LIONS TOO GOOD FOR CRUSADERS

The Lions hit the front foot again, with skipper Jones driving close to the line.

Tim Bateman was caught offside, though, and Farrell slotted his fourth penalty of the night.

That proved enough in the event, with the Lions hugging jubilantly when Farrell blasted the ball into touch for full-time.