Ireland's challenge at the World Under-20 Championships was delivered a potentially decisive blow as Italy emerged victorious in the sides' opening game in Georgia.

With games against New Zealand and Scotland to come, Peter Malone's team would have been hoping for a winning start, but last year's runners-up and top seeds in Pool B now know wins in both their remaining games still might not be enough to progress to the semi-finals.

Ireland started the game sluggishly, and found themselves 12-0 down inside the opening quarter as forwards Danilo Fischetti and Jacopo Bianchi scored tries for the Azzurri, who were seeking their first win over Ireland at this level in 13 attempts.

A Conor Dean penalty got Ireland on the board but Alessandro Troncon's side went into the break 15-3 to the good thanks to an Antonio Rizzi drop goal.

A different Ireland side emerged from the dressing-room and Ireland were level inside seven minutes as Munster wing Calvin Nash twice was on hand to finish off sustained Irish pressure, Dean landing a touchline conversion to square it at 15-15.

Nash continued to spark the Irish attack, both on the ground and in the air, but Italy's defence stiffened and forced a pair of missed drop goals from Dean. 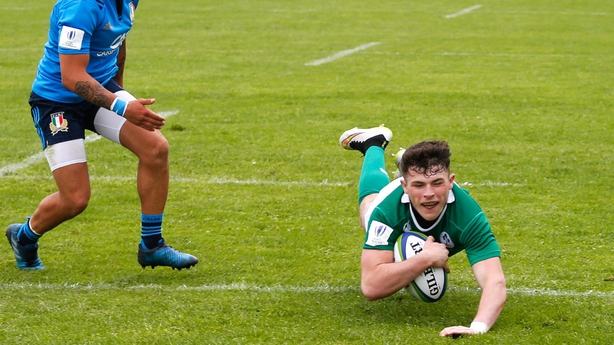 Ireland finally hit the front with a penalty from the Leinster out-half after 63 minutes and Ciaran Frawley pushed the lead out to six with a long-range kick with 10 minutes remaining.

But Italy, having been utterly dominated for the vast majority of the half, suddenly sparked back into life, and got their third try when Marco Zanon broke through the Irish defence and passed inside to Massimo Cioffi. The full-back bobbled the ball but hung on and crossed under pressure from Fineen Wycherley.

Cioffi's conversion from the right touchline looked to have swerved wide of the post only to veer back the other way at the last moment to give Italy a one-point lead.

Ireland pressed for another chance and won a penalty on the Italy 10-metre line, but Frawley's effort was wide of the target.

Skipper Paul Boyle lamented Ireland's slow start, saying: "We are devastated. Italy are a good, physical side and our first half performance wasn't up to scratch. It was a stark message at half-time. Our 'D' wasn't great and we didn't have our attack shape.

"We came back a bit in the second half but fell short in the end."

Ireland must now pick themselves up to return to the AIA Arena in Kufaisi to face Scotland on Sunday, with Boyle adding: "We know we can do it, we just have to sharpen up a few things in training."