Dan Biggar says the pursuit of history is far more important than a selection battle for places as the British and Irish Lions head to New Zealand.

But Biggar has highlighted an importance of the bigger picture - the Lions have not won a Test series in New Zealand since 1971 - during a 10-match trip that many pundits have described as mission improbable.

"What I have found interesting (with Johnny Sexton and Owen Farrell) is the amount you pick up off them, and that goes for other players as well," Biggar said.

"We have chats after training and talk about tactics. The two have so much knowledge, and it is really interesting.

"Johnny and I have got on really well, and after playing so often against him, it is good to be on the same side.

"I am looking forward to challenging him and Owen, and being with them gives you a good perspective on 10 play.

"We are not holding anything back from each other. The greater aim is to win the Test series, so if any of us has any knowledge that can help the team win games from small detail, it is important we put it out there.

"We are all confident characters who are not afraid to speak our minds and say what we think. That will suit the team well.

"We are competing for the same position and we all want to play in that 10 shirt.

"But the most important thing is not the battle for places, but that we do everything on and off the field and back whoever is playing in all the games, because we have the chance to achieve something historic."

In addition to the Tests, the Lions will also face five New Zealand Super Rugby sides and the Maori All Blacks following next Saturday's tour opener against a Provincial Barbarians XV, which underlines how tough a trip lies ahead.

"The majority of New Zealand's Super Rugby teams are flying and playing really good rugby," Biggar added. "It will be a huge task for us, and not just the three Tests.

"The games against the Super teams will be hugely important as well. They seem to have a conveyor belt of talent. They lose (Dan) Carter, and they have (Beauden) Barrett and (Aaron) Cruden.

"The challenge is going to be huge in the Test series, and there will be no greater one in your career. We all have the opportunity to paint ourselves in a really good light.

"As a 10, teams try to target you, putting big runners down your channel. They see you as a weak link, and my attitude is that I like that.

"I work hard and do not mind putting it about a bit. I enjoy a game when it is tight and physical and you have to muscle up a bit. All three 10s in the squad are good defensively." 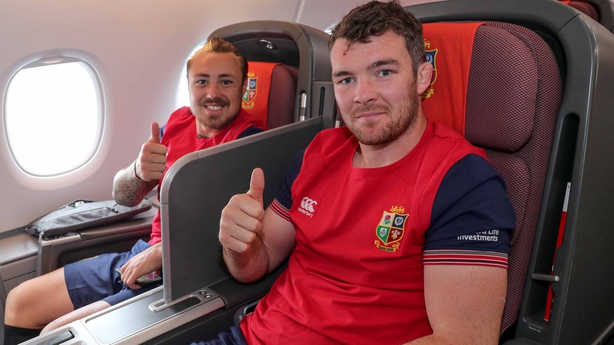 The Lions departed London on Monday after two week-long training camps in Wales and Ireland, and the intensity of a six-week tour to world champion territory now awaits.

"Having toured there last year with Wales, I know we will get a few traditional welcomes in New Zealand," Biggar said.

"Gats (Lions head coach Warren Gatland) has spoken a lot about the home support and how they will try to make our life a bit uncomfortable.