Munster turned on the style as they claimed top spot in the final Pro12 table with a seven-try showing against Connacht at Thomond Park.

The victory, combined with Leinster's defeat by Ulster at Ravenhill, ensured Rassie Erasmus's side top seeding for the play-off semi-finals and a home tie against Ospreys in a fortnight's time.

Munster delivered telling early blows to a Connacht side struggling for form ahead of their own play-off series for a place in the Champions Cup, which sees them face Northampton or Gloucester in the semi-final.

Keith Earls opened the scoring inside 10 minutes, finishing off a simple but effective set play from a scrum.

Connacht were also looking dangerous but Danie Poolman spilled their best chance of a reply when he couldn't handle Jack Carty's pinpoint cross-kick.

Munster found Connacht's defence easy to break down throughout and always looked like extending their lead, with man of the match Ian Keatley - who kicked seven from eight on his 150th appearance in the red jersey - added a penalty before number eight Jack O'Donoghue finished powerfully in the corner to make it 17-0 after 27 minutes.

Young flanker Conor Oliver was almost through but for a fine tackle by Kieran Marmion, but Connacht's respite was brief as Andrew Conway rewarded fine work by Alex Wootton and Keatley with a deft finish. 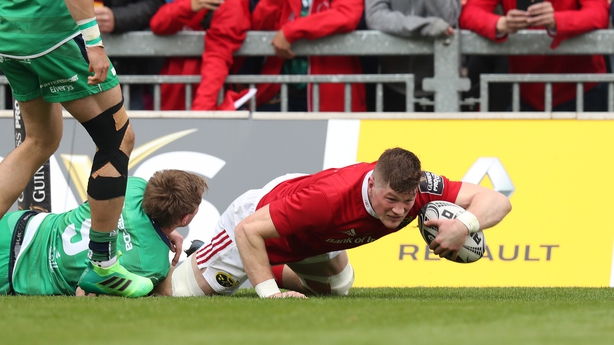 Connacht would have hoped to reduce their 24-point deficit on the restart but prop James Cronin put the result well and truly beyond doubt from close range.

The Westerners did finally get on the board when Cian Kelleher held onto another Carty cross-kick to touch down after 52 minutes, but Munster hit back immediately as Conway was given the easiest of finishes from a delayed Jaco Taute pass.

Conor Murray gave Thomond Park another lift with his return to action, but it was another replacement, Naulia Dawai, who scored the next try after peeling away from a maul to reduce Connacht's arrears to 38-14.

With a quarter of an hour remaining there was still time for Munster to hit back with two more tries, from substitute Francis Saili and the impressive Oliver, to ensure the ideal preparations for the knockout stages for the province.