Conor Murray says his recent injury has been the most frustrating of his career, but is ready to return to action for Munster with the Lions tour on the horizon.

Munster Director of Rugby Rassie Erasmus said earlier this week that the scrum-half might feature in Saturday’s Guinness Pro12 interprovincial derby with Connacht at Thomond Park (KO 5.15pm), and the player himself is eager to get back onto the field.

Murray has not played since sustaining nerve damage to his shoulder and neck in Ireland's Six Nations defeat to Wales in March, and has missed Munster’s six matches in that period, including the Champions Cup semi-final loss against Saracens.

The Limerick native has taken part in full contact in training this week and says his time on the sideline has been challenging, coming as it has at such an important stage of the season.

"It’s been a frustrating four or five weeks," he told RTÉ Sport at a Maximuscle event this morning.

"I’m doing a lot more contact, hopefully I’ll be playing soon, so there is light at the end of the tunnel."

"It’s an unknown timeline with an injury like this.

"It could have been two, three weeks... it’s been six weeks with a little setback in the middle, where I trained a little too hard in the gym and aggravated it a little bit.

"Fingers crossed," he responded when asked if he expects to be involved against Connacht on Saturday.

"We trained Monday, Tuesday, Wednesday and I trained fully with the squad and took a lot of contact and suffered no ill-effects.

"If I continue to improve and there’s no soreness I hope to be involved, please God, if I’m picked."

The nerve injury has resulted in his longest time sidelined from action, and while he only got back to contact training this week, the 28-year-old is hoping to finish the season with Munster on a high.

"There are three games to go if we get to the Pro12 final. Barring things going badly in them and picking up an injury, I feel fit.

"I’ve been able to run and do all my skill work, it’s just been contact and I’ve stepped that up in the last week with one-on-one contact in training.

The upcoming Lions tour to New Zealand is also very much on the radar.

Head coach Warren Gatland has insisted that the Limerick man needs to prove his fitness before getting on the plane, and while Murray admits he feared the worst during the early stages of his rehabilitation, he is confident he will be on track when the squad departs to tackle the world champions.

"Even had he [Gatland] not said that, I would have been pushing to play because I need to be match fit"

"At the beginning I was probably a little bit worried that I mightn’t get back and play, but right now I’m looking to be involved this weekend and that [Lions] should look after itself.

"That [match fitness] is very important.

"Even had he [Gatland] not said that, I would have been pushing to play because I need to be match fit and sharp before getting on a plane for a gruelling tour in New Zealand."

Ireland and Munster scrum-half Conor Murray admits he had fears over his British and Irish Lions tour due to nerve injury. #RTERugby pic.twitter.com/wyN5dEC3Ah 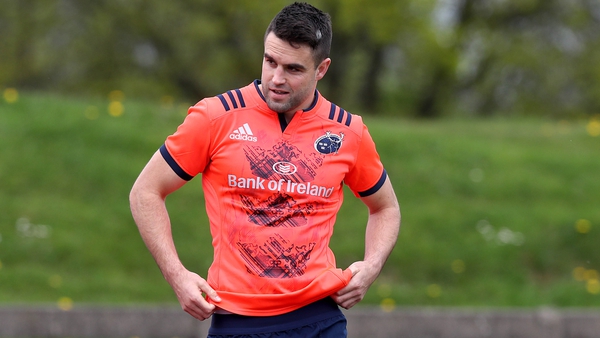