Scarlets sauntered into the Guinness Pro12 play-offs with a 30-8 bonus point victory over error-strewn Connacht at the Sportsground.

There will be two Welsh regions in the Pro12 semi-finals for the first time as Saturday's results confirmed top-four finishes for the Scarlets (72 points) and Ospreys (69), who meet in Llanelli in next Saturday's final round.

Scarlets' eager back-three of Johnny McNicholl, Steff Evans (2) and Liam Williams had the bonus point secured inside 30 minutes, with Connacht trailing 22-3 at half-time despite playing with a strong wind.

It was Bristol-bound Pat Lam's final home Pro12 game in charge of Connacht and they played in the first half as if their minds were already on next month's Champions Cup qualification play-offs.

The visitors were without injured flankers James Davies and John Barclay - the latter a late withdrawal - but Josh Macleod's ruck poach on halfway set the wheels in motion for McNicholl's third-minute opener, the full-back freed up on the left touchline by Steff Evans' well-timed pass.

Man of the match Rhys Patchell's conversion was cancelled out by a 10th-minute penalty from South African Boshoff, but with a much-changed Connacht struggling in defence, winger Steff Evans collected Patchell's long floated pass, threw a dummy and touched down wide on the left.

After a poor penalty miss by Boshoff, Scarlets, who had the dominant scrum, found joy again on the left wing in the 25th minute and some excellent interplay and support lines ended with McNicholl passing inside for Steff Evans to bag his 10th try of the campaign.

The bonus point score arrived on the half hour, Williams profiting from Steff Evans' short pass which looked slightly forward. Hooker Dave Heffernan knocked on a looping pass as the home side pressed for a late response before the interval.

They finally got over the line towards the end of the third quarter as industrious flanker Sean O'Brien won the turnover ball from a scrum and - after the forwards were denied - Tiernan O'Halloran and Tom Farrell passed wide for Ronaldson to raid in from the left.

The difficult wind foiled Boshoff's conversion attempt and Patchell also missed the target from a long-range penalty, but the latter was successful with a close-in effort in the 65th minute.

It was left to Van der Merwe to wrap up the scoring and the Canadian international scampered over after a pacy break from a scrum by fellow replacement Gareth Davies. 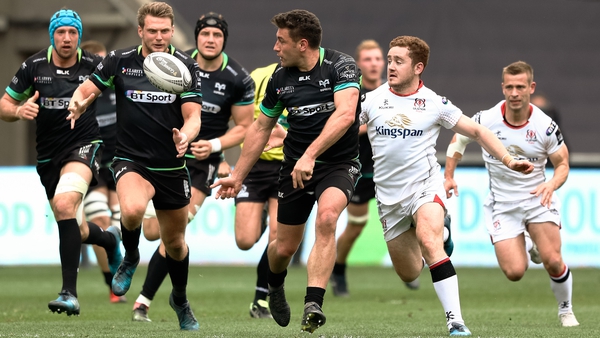 Ulster's play-off hopes all but ended by impressive Ospreys