Munster's Champions Cup dream was shattered by a clinical, brutally effective Saracens juggernaut at the Aviva Stadium on Saturday afternoon.

The province largely bossed a pulsating first half but couldn’t translate their dominance into points, with Tyler Bleyendaal’s early penalty cancelled out by the unerring boot Owen Farrell, who gave his team a 6-3 half-time lead.

That came despite the 23rd-minute sin-binning of Jackson Wray but Sarries shut their opponents down with devastating efficiency. After the break, they went for the jugular.

Mako Vunipola burrowed over following a powerful shove off a lineout maul on 55 minutes, and when Farrell nailed another off the tee there was no way back for Rassie Erasmus’s men.

They huffed and puffed in a desperate bid to find a chink in the reigning champions’ armour, but they simply couldn’t pierce a superb defensive unit. 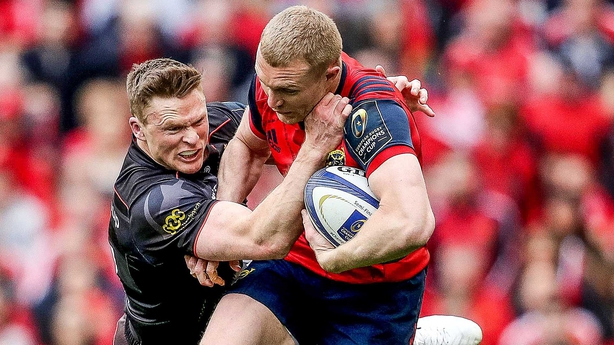 It was an ugly spectacle scarred by endless kicking, the first half alone seeing boot put to ball on 48 occasions, and it was a theme that continued after the interval but this time Munster's sights were off.

Missing their half-back general Conor Murray to a shoulder-related nerve injury, their challenge wilted as the emotion over the death of their coach Anthony Foley earlier in the season proved insufficient to subdue ruthless Saracens.

To reach the final they knew they must weather the Munster storm and it duly arrived right from the kick off, Billy Vunipola driven backwards before their scrum was picked apart twice in quick succession.

Despite the pressure Munster could not force a path over the line, but that is what the champions should have done in their first meaningful attack when quick hands created a brilliant chance only for Richard Wigglesworth to drop an awkward final pass from Sean Maitland.

Farrell cancelled out an earlier penalty from Tyler Bleyendaal, but then invited waves of attackers on to his team when failing to boot the ball away with centre Jaco Taute in pursuit.

Maitland escaped a yellow card for taking Andrew Conway out in mid-air, but Jackson Wray was not so fortunate when his arm struck Duncan Williams' head in the tackle and 14-man Saracens scrambled frantically as Munster renewed their attack 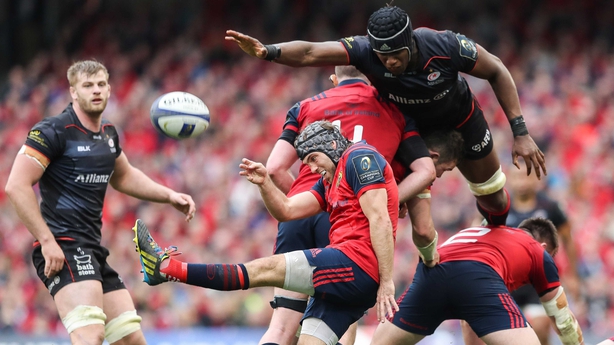 A spectacular leaping catch from Simon Zebo, who snatched the ball from Alex Goode, enabled the Irish province to come again as their stranglehold on the match continued.

Wray returned from the sin-bin - Saracens had not conceded a point in his absence - and after Farrell had craftily ankle-tapped Bleyendaal the England playmaker landed his second penalty.

Remarkably given the territorial pressure they had come under, Saracens entered the interval 6-3 ahead and they emerged for the second half as the more purposeful team.

Now it was Munster's turn to be pinned back, but their furious defending forced an error and they were advancing downfield with intent until a series of poor kicks allowed Saracens to escape.

The kicking was interrupted by a rapid attack off line-out ball that saw Goode maraud into open space but his pass to Chris Ashton was around the wing's head and the opportunity vanished. 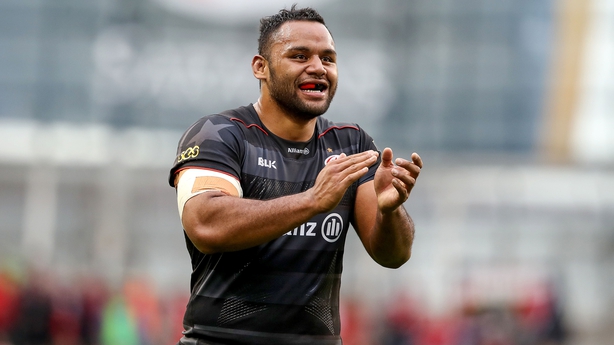 The balance of power had shifted and Saracens should have taken the lead once more when George Kruis showed his wits to surge through the middle of a ruck only to then drop the ball as he stretched out to touch down.

There was an inevitability about the try when it came, Vunipola driven over from a line-out as Munster's defence finally cracked.

A poor missed penalty from Bleyendaal left the two-time champions unrewarded as they sought to respond and when Farrell showed him how it was done the lead was extended to 16-3.

And it was all over when Wyles grabbed Farrell's kick to touch down as Munster's defence became increasingly ragged, CJ Stander's late try from short range offering little consolation.

The Aviva, a sea of red, belted out a defiant rendition of The Fields of Athenry all the same as Munster's stirring European journey came to an end.

Leinster and Clermont will battle for the right to dethrone Sarries in the decider. They'll take some stopping.