Rhys Ruddock wants Leinster fans to bring the Lansdowne roar to Lyon on Sunday and give their team the extra lift they'll need to pull off a daunting Champions Cup mission.

The province take on Clermont on French soil in a mouthwatering last-four collision.

Franck Azéma’s charges battled past fellow Top 14 side Toulon in the quarters to earn a crack at the Irishmen and back-row Ruddock is braced for a titanic showdown.

With such huge occasions often being decided by the smallest of margins, the 26-year-old has urged the Leinster faithful to make their voices heard at Stade de Gerland.

"Having played over in France before in big games... it can be intimidating," he said.

"I think we're well-equipped to go over and put in a performance but we know the difficulty of the challenge ahead is massive.

"Playing away in France against one of the best teams in Europe is always going to be tough.

"We need a bit of voice. I can only imagine there will be a lot of Clermont fans there and it will be really noisy and loud as it always is playing over in France, but I think that will excite everyone.

"We've got enough experience to deal with that. If the Leinster fans can make it over and make it extra special it will give us a boost." 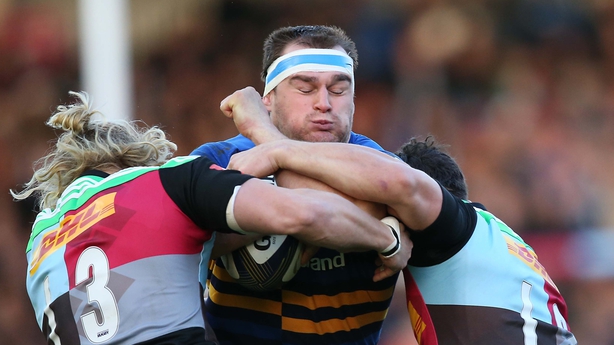 Leinster have come away empty-handed from their last four trips to France.

Clermont will be without Noa Nakaitaci and Wesley Fofana, but no one in the blue corner is expecting anything less than a ding-dong, full-blooded encounter that will test them to the very limit.

"We've seen Clermont playing so well this year; we know how good they are in Europe. It just makes it that extra bit exciting," Ruddock added.

"They're blessed with some real quality and strength in depth and we like to think we are as well.

"We try and prepare exactly the same. The coaches will have a similar plan, but for any big game, the lift in intensity in training, the focus and the extra work that goes in just naturally happens.

"That's always the case going into any big game, in Europe in particular."

Listen to Munster v Saracens live on RTÉ Radio 1's Saturday Sport at 3.15pm, with updates on Leinster v Clermont on Sunday Sport, and follow our live blogs on RTE.ie and the RTÉ News Now app