Rassie Erasmus said Munster showed guts and brains to beat Ulster on Saturday - qualities he believes they must bring to the table against Saracens in next weekend's Champions Cup semi-final to have any hope of glory.

A 22-20 defeat of Ulster at Thomond Park guaranteed the hosts a Pro12 play-off semi-final spot, but they didn't make it easy for themselves.

Dave O'Callaghan's try - converted by Tyler Bleyendaal - 10 minutes from the end snatched the win that sealed a top-four place for Munster and meant they can now fully focus on the Aviva Stadium showdown with Sarries.

For Erasmus, their scrappy derby success was good preparation for next week's challenge..

"It was a gutsy one," he told RTÉ Sport. "I think as well it was, tactically - from the players, not from me - really smart play in the last 15 minutes.

"Ulster went ahead a few times. We could have hanged our heads and though, 'here we go', but the guys stuck together, which is nice"

"There were a few bounces that could have gone the other way and they would have been us comfortably, but I think it shows the character and I guess that's what we're trying to build on for the future.

"That's the kind of stuff you need against a world-class team like Saracens if you want to stand a chance at all.

"Ulster went ahead a few times. We could have hanged our heads and though, 'here we go', but the guys stuck together, which is nice." 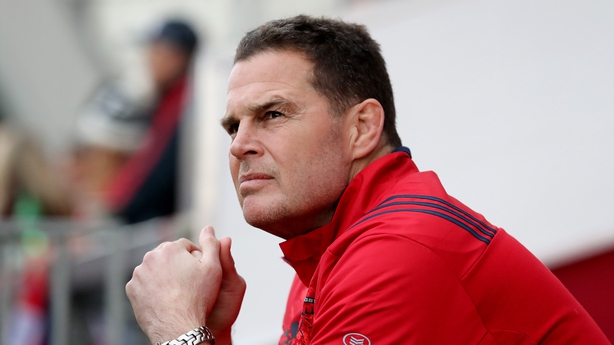 Erasmus was thrilled to see his players exhibit their abilities in such a dogged encounter.

A rammed Aviva Stadium for a last-four collision in Europe's top competition is the stage that now awaits them, and the South African urged his charges to grasp the opportunity to shine with both hands.

"It shouldn't be daunting [playing Saracens]... we've got to he privilege to be one of the top four teams in 2017 and it's a privilege to try and entertain," he said.

"We'll approach it that way and try our best and see where we come out.

"Individuals, outside the game plan, really played well. Francis Saili created some magic moments, the same with Keith Earls, the same with Andrew Conway, Tommy O'Donnell. It was nice to see individuals acting out the plan today.

"We had to get past a good Ulster team, it was going to be a grind.

"We've won this game, we were lucky maybe, and now we've got a big one ahead of us which we'll tackle with privilege."