Sam Warburton remains a clear bookmakers' favourite to captain the British and Irish Lions in New Zealand this summer - despite suffering an injury setback.

The Wales and Cardiff Blues flanker is expected to be sidelined for six weeks as he recovers from a knee ligament strain.

Warburton was hurt during the Blues' Guinness PRO12 clash against Ulster last Friday, but Blues head coach Danny Wilson has allayed any fears about the 28-year-old's Lions tour hopes.

Warburton is expected to be named in Lions head coach Warren Gatland's squad next week - and potentially as skipper - for the three-Test trip in June and July.

The 2013 Lions captain, though, is unlikely to play for the Blues again this season unless they reach the European Champions Cup qualification play-off final, which is scheduled for May 27 or 28.

"Sam has a low grade medial strain which will put him out for approximately six weeks, which won't interfere with the Lions," Wilson said.

"He shouldn't have any problem regarding the Lions.

"Knowing how diligent Sam will be, with all these things, you see players who get back quickly if they follow religiously the protocol and they get a bit of luck.

"Conditioning-wise, he will be well looked after. It will just be a case of getting back on the bike, so to speak"

"And I am sure that will be the case with Sam in terms of him following the protocol, and then we will see, all being well, how quickly he can come back.

"Low grade' was the important bit of news.

"Sam is very experienced and a good professional who knows his body. He knows if he works hard he will be back relatively quickly.

"I think it is relatively good news, considering how it could have been.

"Conditioning-wise, he will be well looked after. It will just be a case of getting back on the bike, so to speak." 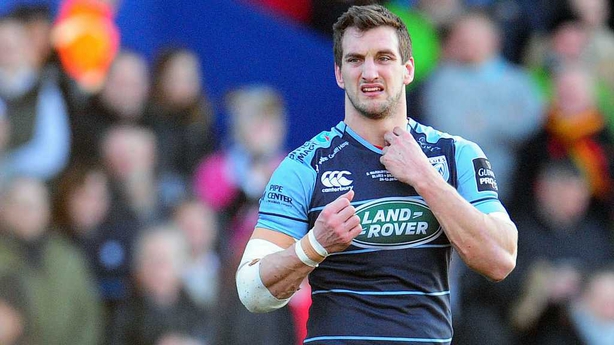 Warburton will miss the Blues' PRO12 appointment with the Ospreys on Saturday, plus remaining regular season fixtures against Zebre and Newport Gwent Dragons.

Warburton's former Wales and Lions colleague Mike Phillips, meanwhile, has announced his retirement from professional rugby at the end of this season.

The ex-Wales scrum-half won 94 caps for his country during a 12-year international career that also included five Test match appearances for the British and Irish Lions across two tours - South Africa in 2009, and Australia four years later.

He called time on his Test career in December 2015, having made a final Wales appearance four months previously.

Paying tribute to Phillips, Sale rugby director Steve Diamond said: "On behalf of the club and the rest of the coaches, I would like to thank Mike for his massive contribution this season to the squad.

"He's a great lad and a true professional, and we as a club have learnt a lot from him. We want to wish him all the best in his retirement."