Jack O’Donoghue believes Munster are getting the perfect run-in to their Champions Cup semi-final.

Johan Erasmus’ side secured their hold on second place in the Pro12 table with a hard-fought 10-7 win over Glasgow in Cork yesterday.

They host fifth-placed Ulster next Saturday ahead of the 22 April clash with Saracens in the Aviva Stadium. 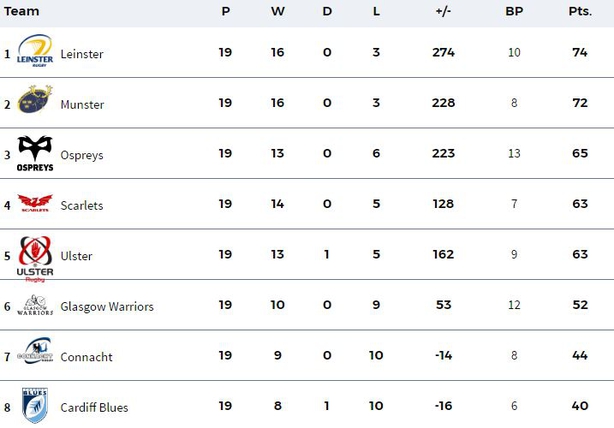 "This is really the business end of the season; there are trophies on the line, there are home semi-finals, that’s what we’re fighting for in the Pro12,” O’Donoghue, who was one of ten changes made to the side that beat Toulouse in the quarter-finals, told RTÉ Sport.

“We’ve a European semi-final in the Aviva to look forward to as well.

“Both sides came with a big physicality and I suppose it was our defence that fronted up and it won us the game in the end.

Man of the match @ConorOliver looks back on Munster's 10-7 win over Glasgow in Irish Independent Park tonight #MUNvGLA pic.twitter.com/tfXyW2JrJk

“I can get a bit more game-time in the next few weeks and it’s going to benefit the squad.

“There’s going to be a few lads rested coming up to big games but these are great games leading into a European semi-final, and that’s what we need.

"We need great competition and big physical matches to get us ready and that’s exactly what we got.”

Tyler Bleyendaal off early due to a confirmed concussion. James Cronin will be assessed for a knee injury. #MUNvGLA