Reigning Guinness PRO12 champions Connacht bounced back from their shock defeat to Zebre by holding off an Edinburgh fightback to win 22-19 at Myreside.

Connacht were stunned 25-22 by Zebre as their hopes of qualifying for the Champions Cup suffered a setback, but Pat Lam's men got their campaign back on track with victory over an Edinburgh side whose losing streak now stands at eight.

The visitors had to withstand a late onslaught, though, with Edinburgh scoring 19 unanswered points in the space of 10 second-half minutes to get within touching distance of their opponents.

That scenario looked a long way off at half-time as Connacht swept into a 16-0 lead thanks to a converted try from Eoin McKeon and 11 points from the boot of Steve Crosbie.

Crosbie then added two more penalties at the start of the second half to put Connacht 22-0 ahead and seemingly home and dry.

But the contest roared back into life as Edinburgh staged a stunning recovery that featured a penalty try and a Hamish Watson touchdown, both converted by Duncan Weir, before Glenn Bryce grabbed a third try to set up a tense finale, which saw the hosts just come up just short.

Edinburgh had a chance to open the scoring four minutes in but Weir, who had earlier missed touch with a penalty from hand, pulled a 40-metre penalty attempt left of the target.

Connacht's first visit to home territory yielded a penalty and Crosbie hammered over the kick to nudge the champions into the lead.

Edinburgh were enjoying the greater share of possession but it was drab stuff. The Irish outfit had barely broken sweat in coping comfortably with the toothless Edinburgh attack, and it was the visitors who bagged the next points when Crosbie banged over his second three-pointer, this time from halfway. 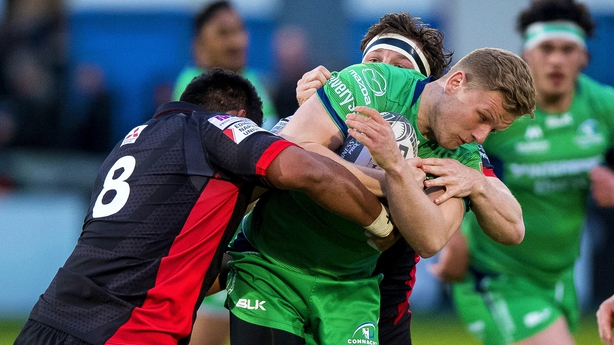 The gap grew to 13 points after half-an-hour when Connacht finally displayed their attacking edge and second phase ball allowed Kieran Marmion to deliver a perfectly-weighted pass to McKeon, who raced over between the sticks untouched, leaving Crosbie with a simple conversion.

A scrum offence on the edge of the Connacht 22 handed Weir an opportunity to atone for his earlier miss. But again he pulled his kick left of the posts.

Within a couple of minutes, Crosbie once more showed him how it should be done, his third successful penalty extending Connacht's lead to 16 points at the interval.

Edinburgh restarted with greater vigour but a promising run ended with Rory Scholes being penalised for holding onto the ball after being tackled.

Connacht were also looking livelier and exhibiting some slick handling. However, they resorted to Crosbie's flawless boot to add a further three points.

The margin could have grown further had Tiernan O'Halloran not knocked on within sight of the line, but the visitors were now firmly in the ascendancy and Crosbie added three more points to the tally with a straightforward penalty.

Connacht were cruising to victory but, in the space of 10 minutes, the complexion of the game was transformed.

Edinburgh's top performer was Watson and the Scotland international flanker created the first score for the hosts. His break carried play into Connacht territory where he offloaded to winger Damien Hoyland, who sprinted into contact.

In the aftermath, O'Halloran intercepted but the Connacht full back had been off side and received a yellow card, while the referee awarded a penalty try which Weir converted.

Within two minutes, Edinburgh were back in the game when a renewed spell of pressure ended with Watson crashing over.

Weir's conversion offered a glimmer of hope, and they edged ever closer with seven minutes to play when Watson again did the spadework and Bryce thundered over for an unconverted score.
However, Connacht managed to negotiate a fraught few minutes to secure the win.