Rory Best returns to captain Ulster for the visit of Cardiff Blues at Kingspan Stadium on Friday night as they aim for a seventh consecutive Guinness PRO12 win.

Best returns to provincial action and he will lead the side from hooker as regular captains Rob Herring and Andrew Trimble are both named on the bench. The latter makes a welcome return having recovered from a hand injury sustained against Treviso last month.

Joining them on the bench is Hughes Insurance Academy back row Nick Timoney, who will make his senior debut if called upon by Kiss. The 21-year-old has produced notable displays for Queen's University RFC, Ulster A and Ireland 7s over the past couple of seasons.

There are two other personnel changes to the starting XV that defeated Dragons 17-27 a fortnight ago, with Roger Wilson and Paddy Jackson also called in by Kiss.

Best is the only new face in the front five, with Andy Warwick, Wiehahn Herbst, Kieran Treadwell and Al O'Connor all retained from the Dragons victory. Wilson's inclusion at number 8 means that Sean Reidy will move to the openside flanker berth, while Iain Henderson will again start at 6.

Jackson, who made an impressive appearance as a replacement two weeks ago, will renew his half-back partnership with Ruan Pienaar. Stuart Olding and Luke Marshall are selected in midfield and the back three of Craig Gilroy, Charles Piutau and Jared Payne is unchanged.

Callum Black, Rodney Ah You and Robbie Diack will join Herring and Timoney as forward replacements on the bench, while Trimble, Paul Marshall and Jacob Stockdale are the backline options. 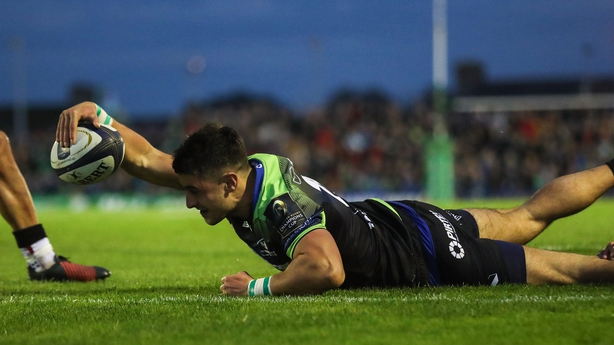 Connacht have made seven changes to the team beaten in Zebre last weekend with Ireland internationals Tiernan O’Halloran and Kieran Marmion among the players to be drafted into the starting team.

O’Halloran has been among the top full-backs in the competition again this season with the most metres gained and more carries than any other player.

Marmion starts at scrum-half and Niyi Adeolokun, having shaken off a niggle, also returns on the right ring. Danie Poolman switches to the left flank while Steve Crosbie makes his second start for the province at out-half.

After making his return from injury off the bench last week, Eoin Griffin is handed a starting place and will partner Bundee Aki in the centres.

There is one change to the front row as Dominic Robertson-McCoy replaces Finlay Bealham with Denis Buckley and Tom McCartney retaining their places.

Quinn Roux and Andrew Browne remain in situ in the second row with Eoin McKeon moving to blindside flanker as Jake Heenan has recovered from a minor shin injury to start at openside flanker. Captain John Muldoon continues at no.8.

Head coach Pat Lam said: “This is our third away game in a row and after last week’s game in Italy, we have an opportunity to produce a performance we can be proud of.

“Although we have been creating numerous opportunities to score, it is all about making sure we take those chances tomorrow night.

“Edinburgh are always tough, physical opposition and we are looking forward to a big challenge on our first visit to Myreside.”