Sam Warburton readily acknowledges that Wales have "points to prove" when they tackle RBS 6 Nations rivals Ireland on Friday.

Wales will dip to a 10-year low in the tournament if they come unstuck under the Principality Stadium floodlights.

They have not lost three successive Six Nations games in one season since 2007, but after defeats against England and Scotland effectively ended their title hopes, that is the possible scenario facing them.

Ireland have toppled Wales five times from eight previous Six Nations visits to Cardiff, while the visitors will keep this season's title race alive if they win, setting up a Dublin showdown with unbeaten England next week.

Wales boss Rob Howley has retained the entire starting line-up and replacements' bench that featured in Edinburgh 12 days ago, bemusing those critics who felt changes were inevitable following a second-half implosion when Scotland scored 20 unanswered points.

And former Wales captain Warburton, who lines up in the back-row alongside Justin Tipuric and Ross Moriarty, accepts that a response is required.

"We've seen it in the past where we have let ourselves down, gone back out the week after and produced a positive reaction," he said.

There are quite a few things to put right there

"I am sure the coaches and players are expecting that to happen again.

"We have points to prove. The second-half performance against Scotland was not up to scratch.

"There are quite a few things to put right there, and as a team we have got the opportunity to do that.

"When we actually look at the games [England and Scotland], if we were getting completely outplayed, I would be a little bit worried.

"But when we look back - and the players have spoken about it - it has been individual errors that have let us down in certain moments of matches.

"We are talking about the last 15 minutes against England and perhaps the first 15 minutes of the second half versus Scotland. They are easy fixes, and we're hoping [against Ireland] we will be a lot more disciplined, which will hopefully help us through." 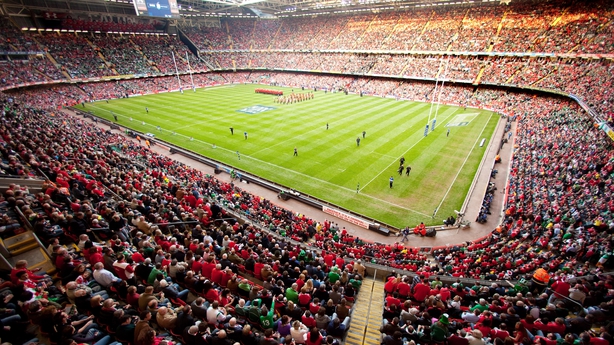 Warburton and company completed their preparations with a training session at the Principality Stadium on Thursday, after which, Wales assistant coach Robin McBryde confirmed the stadium roof would be closed for Ireland's visit.

"It is staying closed," McBryde said. "Ireland are more than happy to go with our decision. It will be a fantastic atmosphere."

Asked about criticism of Wales after the Scotland defeat, McBryde added: "I think each individual deals with it differently. If you go looking for it, you are going to find it, the criticism.

"As far as I am concerned, when you are taking part in international rugby as a player, as a coach, you are under constant pressure. Maybe a little bit more so in Wales.

"The way we react to it, that can only be shown on the field.

"For myself, personally, there is still a level of hurt there from the Scottish defeat, and I am sure the players are feeling that as well, so we need to react in a positive manner against what will be a very confident Ireland team.

"We've shown faith in them as coaches that we feel there is a lot more to come. They are deserving of that opportunity, and this is their shot at it.

"Until we do get that victory, obviously that pressure is going to mount considerably. It's in adversity that you show your true colours. Hopefully, we will step up to the plate tomorrow night."