Connacht made it four Guinness Pro12 wins in a row with a 33-3 bonus-point dismissal of Zebre at a very muddy Sportsground.

The cold, wet and windy conditions made a mess of general play, but a couple of well-taken tries from Niyi Adeolokun and Naulia Dawai had Connacht 12-0 ahead at half-time.

Guglielmo Palazzani's penalty kickstarted a strong third quarter from Zebre before the westerners wrestled back control with a John Muldoon effort, a penalty try and a closing seven-pointer from Lewis Stevenson.

Pat Lam's men have moved above Cardiff Blues into seventh place in the table.

John Cooney's curling conversion was followed by a stop-start spell, the visitors unable to threaten from a static scrum and a couple of clever kicks from Cooney and Bundee Aki seeing Connacht win the territory battle.

The province's returnees Eoghan Masterson and Andrew Browne were both effective in their carrying and clearing out, and the former's charge-down of Palazzani almost led to a try - man-of-the-match Eoin McKeon's score was ruled out by TMO Jon Mason for a pull-back on the Zebre scrum-half.

However, just two minutes later, a quickly-taken lineout saw the ball shifted across the field to Fijian flanker Dawai who unlocked the defence with a snappy step and nice turn of pace to crash over in the left corner.

Zebre failed to score via a five-metre lineout and a subsequent scrum - number eight Federico Ruzza infringed on his way to the whitewash - and Connacht's late onslaught before the break, during which Zebre captain Valerio Bernabo was sin-binned for a push at a lineout, also had no reward.

The 14-man Italians opened the second half's scoring with a close range Palazzani place-kick, however he had a poor miss three minutes later from in front of the posts.

In falling off tackles and dropping passes, Connacht were allowing Zebre to dictate. Their replacement prop Bartholomeus le Roux was unfortunate to lose control of the ball as he reached for the try-line in the 53rd minute.

Lam's men took up the baton again on the hour mark, regular captain Muldoon and Kieran Marmion having the desired impact off the bench with Marmion's excellent long range break seeing him hoover up the metres.

Zebre were caught offside in front of their posts and a quick tap saw Muldoon go over for O'Halloran to convert. The hosts had the bit between their teeth and when Zebre pulled down an advancing maul, referee Marius Mitrea reacted by awarding a penalty try which Jack Carty converted.

The championship's bottom side leaked a fifth score five minutes from the end. Craig Ronaldson provided the impetus with another quick tap and second row Stevenson bulldozed over to the right of the posts. 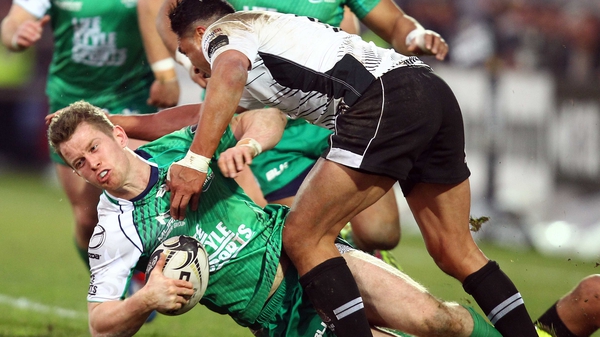