Rassie Erasmus breathed a hefty sigh of relief after Munster's dramatic victory at the Ospreys and what he described as one of the toughest offensive challenges Munster have faced.

Dave Kilcoyne squeezed over the in the closing stages to snatch an improbable win - the visitors were 17-3 down before Jack O’Donoghue and Francis Saili tries hauled them back into it before half-time.

It was nip and tuck on the turnaround, but Kilcoyne's try and Tyler Bleyendaal's conversion swung it, and left Erasmus a happy man.

“I’m very relieved," he said afterwards. "Everyone knows the game could have gone the other way. It was a tense game and we’re relieved to win.

"The physicality wasn’t there for the first 15 minutes."

“To go 17-3 down, we had to turn the pressure around. The try just before half-time helped. In the second half we played tactically a little bit better, but still we weren’t getting the scores.

"To get it eventually two minutes before the end is relieving but obviously there’s a lot of work which we have to rectify."

They were on the ropes, struggling to handle an all-action home affront, but weathered the storm to eventually snatch a big win and go top.

"The physicality wasn’t there for the first 15 minutes," he said.

"For the guys to realise that... and to turn it around, it’s sometimes difficult to do that in a game and Dave was one of the guys that led that fight.

“It’s one of the toughest offensive challenges we’ve had. A top-four finish is one of the first milestones we want to create; to be in a semi-final.

“We’ll just try and focus on Scarlets (next week) and try and grind out a win there as well. We haven’t played a team, maybe apart from Connacht, who play the brand the Ospreys play so you must switch on and handle a different challenge. It’ll be a tough challenge next week.” 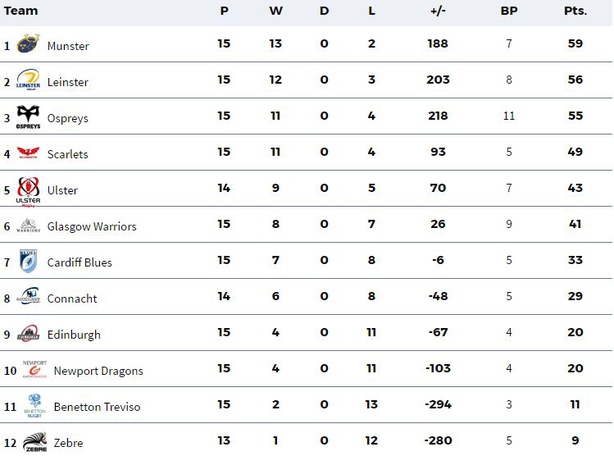