Connacht head coach Pat Lam was frustrated to miss out on qualification to the European Champions Cup quarter-finals by just two points.

Lam's men needed a losing bonus point to earn second place behind Wasps in Pool Two but fell to a 19-10 defeat at Stade Ernest Wallon.

Instead, it was the French side who booked a quarter-final trip to Munster.

"When you miss out by two points, it's a killer blow. We had our chances to get over the line."

"The last thing you want to do when you come over here is give them a lead of 14 points." - Pat Lam

It was a gutsy performance from injury-hit Connacht, who missed the ball-carrying force of sidelined duo Bundee Aki and Ultan Dillane.

Fast-starting Toulouse hit them with first quarter tries from man of the-match Gael Fickou and Arthur Bonneval for a 14-3 interval lead, and influential flanker Joe Tekori also crossed in the 46th minute. 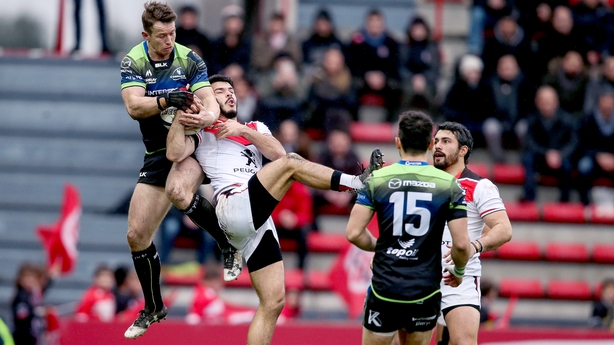 Lam admitted: "The last thing you want to do when you come over here is give them a lead of 14 points, particularly off a couple of system errors.

"A lot of teams down by 14 points could easily fold, but the boys came back really well, and we knew the situation. We just needed a penalty or try to get within seven. We had chances and couldn't take them."

The Pro12 title-winning coach felt better game management in the final 10 minutes could have seen Connacht work a drop goal opportunity or force a penalty kick from a couple of visits to the Toulouse 22.

He added: "To take Toulouse, with their history and European record, to the last play just shows how far we have come, but it still doesn't take away the disappointment, and there are learnings there for a lot of the young guys in the team.

"The boys knew what they had to do. Ultimately, there were chances to score, but we didn't, and at the end of the day we'll look at the last bit of play and there were so many things we could have taken, so we only have ourselves to blame for that, and we'll put it away as a learning experience."

Meanwhile, Toulouse captain Thierry Dusautoir expects Munster will be tough quarter-final opponents, especially at Thomond Park. The sides met in the last eight in 2014 when Munster powered their way to a six-try 47-23 win.

He said: "It has been very difficult for Munster having lost Anthony Foley, but this will make them stronger. I think all the supporters are behind them as always, but even more and more this year. We know it will be hard.