Munster's Director of Rugby Rassie Erasmus felt a sense of relief after his side defeated Racing 92 22-10 at Thomond Park to secure a home quarter-final in the Champions Cup.

Munster rounded off their Pool One campaign with a hard-fought victory over a gritty Racing outfit before a sell-out crowd, with second-half tries from Ronan O'Mahony and replacement Ian Keatley adding to Simon Zebo's 36th-minute breakthrough score.

This is the first time in three seasons that Munster have qualified for the knockout stages of Europe's top-tier tournament, and Erasmus felt the 12-point success against the reigning French champions showed that the Reds are continuing to learn and show composure at key times.

"To finish up as second seeds and to have the chance to try and go a little bit further, it shows the team is growing"

"It was a tough match physically, you could see Racing decided two weeks ago that they were turning their season around. Their performance against Leicester last week showed that," said the South African, referencing Racing's 34-3 defeat of Tigers.

"We are in the second half of the year and they want to get it right. Racing selected a team that was pretty close to full strength, so we knew it was going to be one of those games where they were going to have big moments and we would have to grind it out and try and handle their big moments.

"It was a good win at the end, but it certainly wasn't the prettiest game." 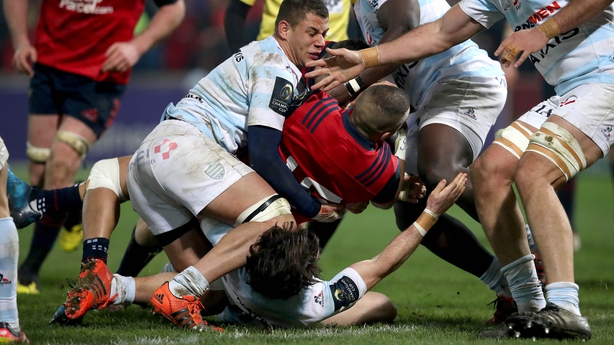 Keatley's 70th-minute try wrapped up the result for Munster who were also 32-7 winners in Paris a fortnight ago. They did not need to push on for a bonus point this time as their winning margin was enough to place them as second seeds for the quarter-finals.

"I think we are learning, and cool heads showed at the end when we were calm enough to understand that we could have gone for the fourth try and by that secure the second seeding or just beat them by 11 points or more which we did," said Erasmus.

"It was a good grind. To finish up as second seeds and to have the chance to try and go a little bit further, it shows the team is growing. If this was presented to us in June or July last year we would have said, 'Wonder, what a great season'.

"The trick now is not to say that. The trick now is to say, 'Listen, we are in a position now to go a little bit further'. Let's try and see how the injuries are, how the guys come through the Six Nations and back into the PRO12 and see what squad we have available when we get into the quarter-finals."