Connacht captain John Muldoon has signed a new deal at the province which will extend his career at the Sportsground to 15 seasons.

The Portumna man made his senior debut in 2004 and has since played 291 times for his home province, including 66 European games.

The highest capped player, both for Connacht and in the PRO12 championship, the 34-year-old has started 16 of Connacht’s 17 games this season.

Muldoon says he is eager to extend his playing career while the hunger remains as strong as ever.

“It’s hard to believe next season will be my 15th with Connacht,” he said.

“I am proud of everything we have achieved, highlighted by the PRO12 win last season, but I believe there is a lot more to come from us as a club.

“I have always said that I would like to continue playing if I had the physical fitness and mental hunger to do so. I am loving my rugby and continuously learning and it was an easy decision in the end to sign on again.”

Head coach Pat Lam is pleased that Muldoon, captain for the last six seasons, has committed to another year in green.

“John represents so much of what Connacht Rugby is about,” he said.

“He continues to drive high standards of himself and everyone around him. I have seen how others constantly look to him as an example of what you can achieve with hard work and determination.”

Looking ahead to Sunday's key Champions Cup clash away to Toulouse, Jack Carty is back training with the squad following the knee injury sustained in the Pro12 game away to Ospreys last month.  Ronan Loughney, Jake Heenan, and Eoghan Masterson are also back in contention for places as they recover from their respective knee injuries.

Shane O’Leary (concussion) and Peter Robb (concussion) have successfully completed the return-to-play protocols and will resume training. Josh Rowland (knee) sustained an injury to his knee playing for the Connacht Eagles at the weekend and will be out of action for up to two months.

Denis Buckley (foot) sustained a foot injury in the Zebre game and will be monitored this week by the medical staff up to the Toulouse game. 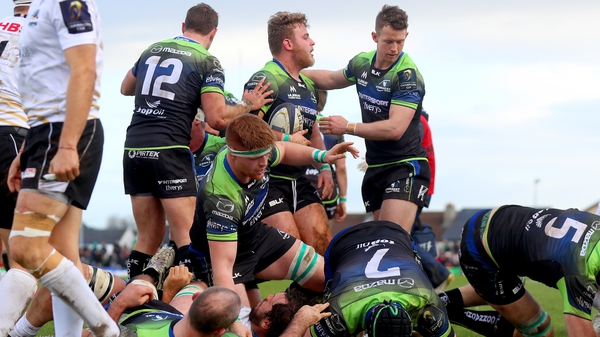 What the Irish provinces need this weekend in the Champions Cup