Ulster's Champions Cup dream is over after they slipped to a 31-19 defeat to Exeter at Sandy Park.

The winners touched down for four tries and it was a penalty try that sealed it on 71 minutes - a period of play that saw Paddy Jackson sin-binned.

The bonus-point win saw the Chiefs leapfrog both Ulster and Bordeaux into second place in Pool 5, but to secure qualification Exeter have to gain a bonus point victory in Clermont next weekend and hope a number of other results go their way.

The explosive Charles Piutau scored two tries for Ulster and Sean Reidy the other, with Paddy Jackson converting two. 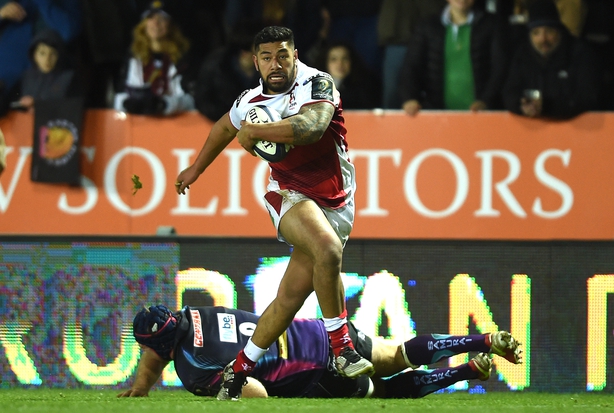 Ulster stunned their opponents by taking a second-minute lead with a superb try. From a line-out 45 metres out, Stuart McCloskey sailed past Ian Whitten's tackle to race away and create a try for the supporting Reidy.

Jackson missed the straightforward conversion but Ulster looked sharp and nearly scored again as Iain Henderson was narrowly denied, being hauled down five metres from the try-line.

Jack Nowell threatened the visitors' defence with a couple of trademark bursts but surprisingly Reidy's try was the only score of an entertaining and even first quarter.

Shortly afterwards, Chiefs drew level with an excellent try which began deep in their own half. The hosts secured a turnover before some good ball retention and well-timed passing gave Campagnaro the chance to sell a dummy and run the remaining 20 metres to score. 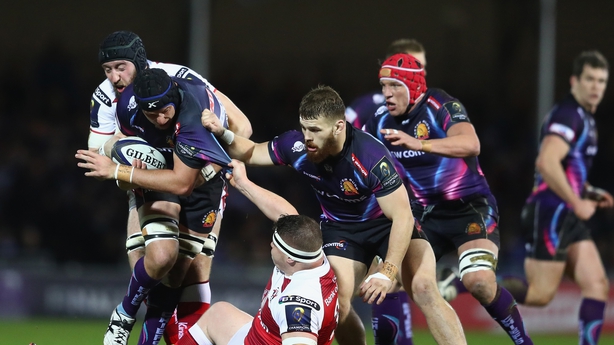 The home side were becoming increasingly dominant as the game progressed and were rewarded when Waldrom forced his way over from close range.

Ulster suffered a further setback when prop Ross Kane limped off to be replaced by Jonathan Simpson but immediately overcame the blow by scoring a second try.

It was a brilliant solo effort from Piutau, who side-stepped three defenders for the try which Jackson converted to make it 12-12 at the interval.

Exeter began the second half strongly to camp in the opposition 22 and put Ulster under great pressure. Chiefs declined a number of kick-able penalties in favour of more attacking options as they sought the bonus point they desperately needed.

The third try came after 50 minutes when Waldrom forced his way over for his second before another skilful move saw Exeter get their bonus point just three minutes later.

An exquisite pass from Phil Dollman sent Nowell away before the wing released Campagnaro to score his second try and Exeter led 24-12 at the end of the third quarter.

Ulster came right back into contention with their third try when Piutau collected a clever cross-field kick from Jackson to score and set up a tense finish.

The visitors were narrowly denied a fourth try when David Shanahan narrowly failed to win the touchdown after another superb run and kick ahead from Piutau.

Steenson missed a penalty as Exeter's nerves jangled but Chiefs secured victory after 70 minutes when referee Roman Poite awarded a penalty try after Jackson knocked down a scoring pass from Nowell with the outside-half also yellow-carded.