Connacht moved top of Champions Cup Pool 2 with a ten-try 66-21 win over Zebre at the Sportsground.

The bonus point was secured after half an hour and it was then just a matter of how many tries they could run in to put pressure on pool rivals Wasps and Toulouse.

Pat Lam’s men, currently five points clear at the top, can safely assume that the English side will gather five points next week in their final game away to the Italians, while Connacht will look to pick up something from their trip to Toulouse to put them in the mix for a quarter-final berth.

Despite showing some early promise with tries from Johan Meyer and Federico Ruzza, the lowly Italians coughed up the bonus-point score by the 27th minute and ended the first half with two men in the sin-bin. 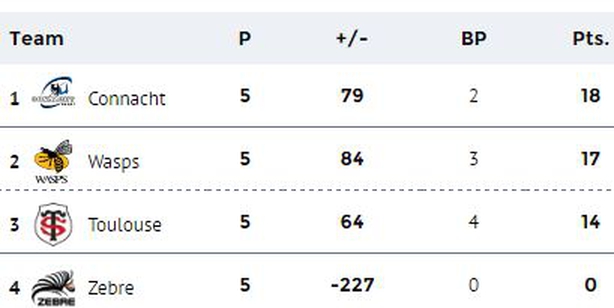 Converted tries from Matt Healy, John Cooney, man-of-the-match Tiernan O'Halloran and Finlay Bealham guaranteed the extra point for Connacht, before additional efforts from Kieran Marmion and Craig Ronaldson made it 40-14 at the interval.

Connacht's try tally stood at 10 by the final whistle, Healy, O'Halloran and Marmion all completing their braces, with replacement Caolin Blade getting them into double figures and lock James Cannon playing a starring role up front.

Owing to Connacht's current injury crisis, Cooney played at fly-half for the first time and landed eight conversions, including a brilliant banana kick in the blustery wind.

The eager Galway crowd did not have long to wait for the first try, the clock showing just 95 seconds when winger Healy glided over unopposed on the right after full-back O'Halloran had been sprung through midfield.

However, a poor turnover in their own 22 led to Connacht leaking a sixth-minute response, Kurt Baker going close before fellow southern hemisphere recruit Meyer muscled over from a couple of metres out. 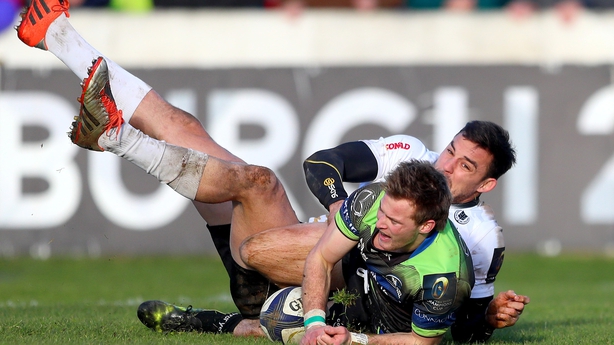 Strong first-up defending from Gianluca Guidi's side forced another turnover and ultimately their second converted try, the forwards laying the platform for number eight Ruzza to notch his third European score of the season.

Cooney converted his own 16th-minute try to get Connacht back on track, finishing off a crisp move that began inside halfway via Marmion's inviting pass that sent Sean O'Brien galloping into space.

Scrum-half Marmion increased his influence with a snappy break and with the Connacht maul drawing a penalty, Cooney's nicely-weighted kick through was touched down by a diving O'Halloran under the posts, with the conversion restoring the early seven-point buffer.

As Zebre's discipline worsened, the hosts took full advantage, prop Bealham finishing off a well-executed lineout drive for the bonus-point score and the Italians losing winger Lloyd Greeff to the bin for a high tackle on Niyi Adeolokun. 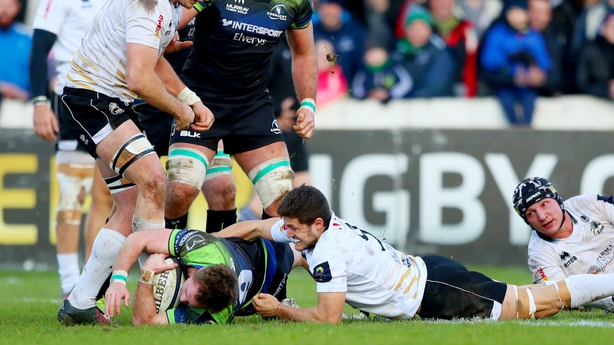 Tighthead Pietro Ceccarelli joined him on the touchline after successive maul infringements, allowing Connacht to pick off two more tries with Marmion twisting over from an advancing scrum and then providing the assist for fit-again centre Ronaldson's canter in by the posts.

Zebre's tackling was awful at times and Healy had his second try barely a minute into the second period, with O'Halloran then doing likewise after the pacey pair had linked up again on the left wing.

Replacement forwards Dave Heffernan and James Connolly were to the fore as excellent hands released Marmion for a 48-metre sprint to the line, seeing Pat Lam's men cross the 60-point mark.

The emptying of Connacht's bench, combined with some sloppy general play, allowed Zebre to dictate in and around the hour mark and centre Mattia Bellini helped himself to a close-range converted try.

However, the home side managed to have the final say when Healy scampered away from inside his own half and passed for the supporting Blade to complete the scoring with 14 minutes remaining.