Tadhg Furlong believes both Leinster and Ireland must restore their reputations at European level after disappointing campaigns last year.

The province endured a miserable end to their Champions Cup in 2016 - recording only one victory and finishing bottom of a pool that contained Wasps, Toulon and Bath - while Ireland won just two of five games in their pursuit of a third Six Nations title in a row.

This time out, Leinster are in pole position to win Pool 4, which they can confirm with victory over Montpellier at the RDS on Friday night, and Ireland have been buoyed by November wins over New Zealand and Australia.

In a Lions year, tighthead prop Furlong, who has already been singled out for praise by head coach Warren Gatland, is well aware of the importance of making an impact on the elite stage.

"Motivation is high at both national and provincial level," he told RTÉ Sport.

"Motivation levels are really high in Europe for us (Leinster) because of the way we went last year.

"Obviously, the Six Nations, the way it went last year as well, defending it as twice winners and having disappointing results.

"I don't think there's anyone out there thinking of Lions yet because it's so far away and people still have so much to prove in the Six Nations and in Europe.

"It's any young lad's dream, who grows up playing rugby and watching videos of the Lions, and it's nice to be name-checked but there's still a lot to prove." 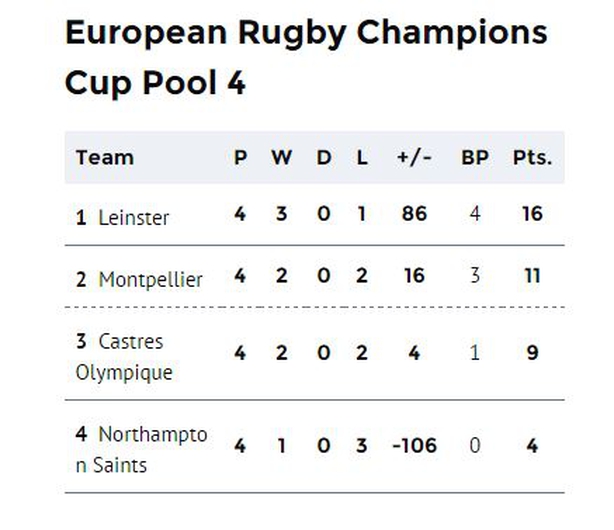 While a win on Friday would set up the prize of a home quarter-final for Leinster's final-day trip to Castres, defeat to Challenge Cup holders Montpellier would throw the pool wide open.

"It's going to be a huge challenge for us. They're an incredibly physical, well-stocked team and they travel well," warned Furlong.

"If they win they're right back into contention in the pool and if we win we're guaranteed a quarter-final spot so it's all to play for.

"To get a home quarter-final we'll probably need two wins but there's no point talking about it if we don't get into the quarter-finals.

"This game at the weekend is the main focus in the short-term."

Leinster went down 22-16 to Montpellier in October and Furlong says his forward colleagues are keen to prove themselves against an opposite eight that made a big impact.

"It's a good test for yourself to see where you're at, and see the attitude of the pack," he said.

"They mauled pretty successfully over there against last time and you take it as a dent to your pride when you concede a few mauled penalties.

"It's about fronting up and turning up on the day."