Munster must “lay down a marker” from the start against Glasgow if they want to do the double over the Warriors in the Champions Cup.

The Reds demolished Gregor Townsend’s side back in October, just one day after the funeral of head coach Anthony Foley, who died the previous weekend in Paris.

The visitors to Thomond Park were favourites to win that one but, in the event, Munster never looked like being beaten, despite having Ireland international Keith Earls sent off after 20 minutes.

And Stander, man of the match in last week’s hammering of Racing 92 in the re-fixed game from last year, has warned his colleagues that Saturday’s hosts will aim to burst out of the blocks (kick-off 5.30pm).

“You need to set the tone from the start,” the back row told RTÉ Sport.

“Normally, in games like these, the guys who lays down the marker in the first minute or the first ten minutes is going to take charge of the game.

“A few times this year, we haven’t done that. We have to find that balance because they’re going to be up for it.” 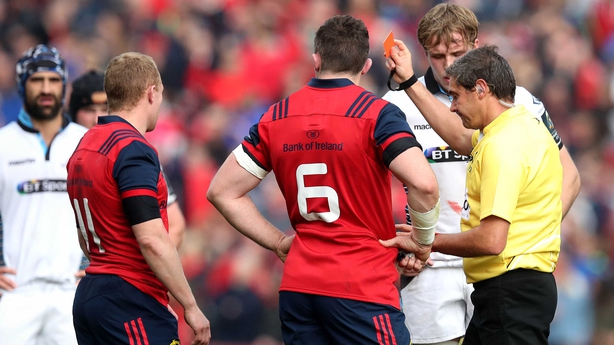 Glasgow, who recorded home and away wins over Racing, know that a win could see them top of Pool 1, providing Johan Erasmus’s side don’t pick up a bonus point.

South African Stander, who has ten Ireland caps, said: “Everything’s on the line.

“For us, we’ve been disappointed the last few years, for them they want to prove to themselves and to their coaches what they can do as a team, be consistently good, so it’s going to be a great match-up.

“It’s good to have those ones in the pool so if you qualify at the end of it you go into those [knock-out] games knowing that you’ve played a very physical game and you played [with] something on the line before.”