Rassie Erasmus is ready for a ding-dong festive derby battle with Leinster on St Stephen's Day, and said the meeting of the provinces “is more than just an ordinary match".

The two rivals are deadlocked at the top of the Pro12 tree ahead of their Thomond Park showdown.

Erasmus's men may have slipped to a last-gasp Champions Cup defeat at Leicester Tigers last weekend but they've been in terrific form over the last two months, and are eyeing swift revenge for their Aviva Stadium loss in October.

“It is more than just an ordinary match," Erasmus told RTÉ Sport.

"Obviously the one we played up in the Aviva, I could feel it. There’s more intensity in the week building up, but then again the 80 minutes is the most important thing.

"It doesn’t help if we all get hyped up and talk about the whole game and then in the 80 minutes we don’t deliver. It’s a top-of-the-table clash, which makes it interesting.

"It might have a good bearing on the rest of the season so it’s important to try and beat a tough team like Leinster at home."

Owen Williams booted a huge penalty a the death to snatch victory at Welford Road.

It left Munster second in Pool 1, two points behind Glasgow Warriors having played a game less, and Erasmus admitted they've plenty to work on if they're to send their fans home happy next Monday evening.

"We have to look back on it but it wasn’t a great performance," Erasmus said.

"It’s good to get a [losing] bonus point out of it but we could have had a win there. It’s disappointing. 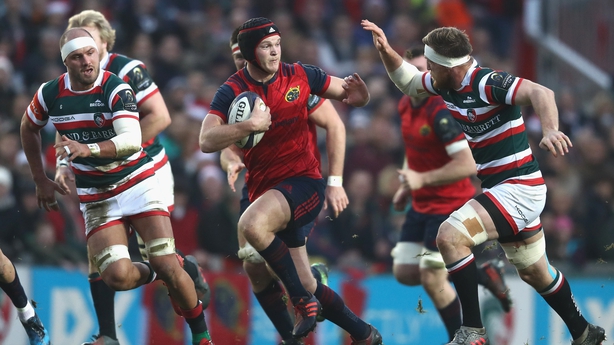 "Luckily it’s a lot of stuff we can rectify but then again that for them to guts it out like that and Owen to kick that last penalty, sometimes you  just have to give credit to them also.

"Overall there were chances for us but it would have been a steal for us at the end if we’d took that."

Thomond Park will be packed to the rafters for the visit of Leo Cullen's men -  extra temporary seating has been installed to bring the capacity up to 26,200 - and Erasmus is keen to harness the energy of the crowd.

“It’s always fantastic to play in front of our home," the South African added.

“The expectation is to play with honour and pride."