Leinster head coach Leo Cullen was delighted to see his side show their clinical edge in the comprehensive 60-13 Champions Cup victory over Northampton Saints at the Aviva Stadium.

Braces from wingers Adam Byrne and Isa Nacewa and a try apiece from man-of-the-match Sean Cronin and his front-row colleague Tadhg Furlong were the highlights of the nine-try triumph which puts Leinster six points clear at the top of Pool 4. 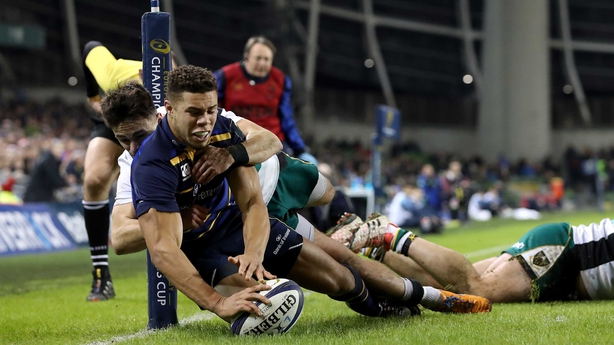 Cullen was thrilled with their response to falling behind in the early stages of the contest and said: "I thought Northampton came out strong. Obviously, it went to 13-5 in their favour, but I thought the players showed really good composure.

"As the game wore on, I thought we were pretty clinical at taking opportunities. We talked before the game, and even after last week, some of the positions we got ourselves into and we didn't fully capitalise on.

"It's an area that we would have spent quite a lot of time working on this week. That was pleasing, and also probably the bench coming on I thought brought really good energy, and kept the momentum going."

"We know that Leinster are playing well, we saw that last week. A quality side..." - Jim Mallinder

Because of injuries to Jonathan Sexton and Joey Carbery, Ross Byrne made his first European start for the hosts at fly-half. Playing in front of a crowd of 38,584 is a daunting prospect for any young player, but Cullen felt he produced a strong performance on the night.

"Ross is someone who is ambitious, he's hungry to be successful, and he works hard. He's put in a lot of work over the last number of months. It's good to see him getting the rewards. It's a big test coming in playing at the Aviva against a good, strong Premiership team.

"He's acquitted himself really, really well and he's run the team well. Ross stepped in, and he's been really, really confident, assertive with the group, and it's great to see some of the characteristics that some of our younger players are showing."

With their chances of progressing to the quarter-final already slim heading into this game, Northampton boss Jim Mallinder opted to make wholesale changes to his starting line-up. He beleives it was the sensible option ahead of three crunch Aviva Premiership clashes with Sale Sharks, Gloucester and Bristol.

"We made changes in the team, brought some fresh faces in. We know that Leinster are playing well, we saw that last week. A quality side, full of international players," said Mallinder, who watched Ken Pisi score their only try from a first-half interception.

"I think it was fairly obvious that we were going to be struggling to qualify for the next round, so it was sensible to make some changes. Some good experience for some of the younger lads.

"The reality is we've got three massive league games coming up over the Christmas period."