The Welshman's winning 52-metre strike came a minute from time as Leicester triumphed 18-16 just a week after shipping 38 points against the same opponents.

It meant that Leicester ended Munster's 100 per cent Pool One record heading into the final two rounds of group fixtures next month.

Leicester, European champions in 2001 and 2002, still have it all to do in their quest for a last-eight place, but fly-half Williams' 100 per cent kicking accuracy relieved pressure on both the Tigers squad and rugby director Richard Cockerill as the home side prevailed.

Tigers have lost only one of their last 34 European games at Welford Road, and despite seeing England centre Manu Tuilagi sin-binned for the second successive game - this time following a shoulder charge on Munster's Rory Scannell - they ultimately delivered.

And, while Leicester themselves ended the game a man down when skipper Tom Youngs received a yellow card, the visitors could ultimately find no way back, although three Bleyendaal penalties ensured they headed for home with a losing bonus point. 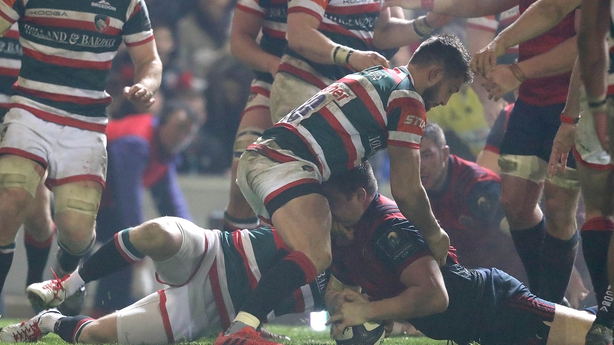 And it kept Munster just two points behind group leaders Glasgow with a game in hand, with Leicester holding third spot, a further three points behind.

Leicester showed three changes from the side crushed in Limerick last weekend, with centre Jack Roberts, prop Pat Cilliers and flanker Luke Hamilton all starting, while Williams switched to number 10 instead of an injured Freddie Burns.

Bleyendaal, who kicked 18 points to underpin Tigers' downfall at Thomond Park, opened his account with a 10th-minute strike after Leicester full-back George Worth was penalised for a late challenge on his opposite number Zebo.

Leicester just could not get going, being guilty of spilling possession that undermined any attacking consistency, and when Munster mounted a first sustained spell of pressure, the Tigers infringed and a second Bleyendaal penalty made it 6-0.

The stakes were huge for Leicester, but they initially performed like a team riddled with nerves, and Munster missed a strong chance to move further ahead when Bleyendaal drifted an angled penalty attempt wide. 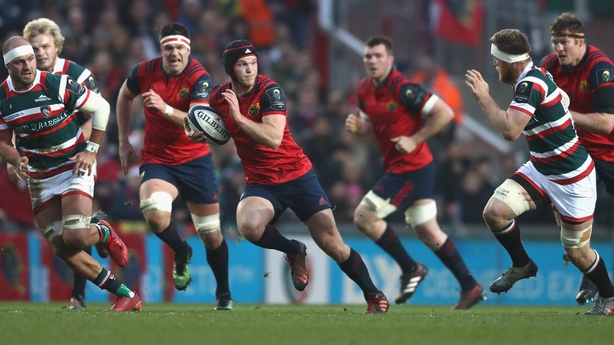 But there was no end to Leicester's frustration, and as Tom Youngs remonstrated with Munster players, Tuilagi was yellow-carded by French referee Pascal Gauzere following a reckless challenge on his opposite number Rory Scannell.

As so often happens, though, it galvanised the team temporarily reduced to 14 men, and Leicester opened their account through a Williams penalty six minutes before the break while Tuilagi was still off.

Williams then tied things up with a second penalty, only for Bleyendaal to miss a second successive chance after Roberts infringed, and a tense opening 40 minutes ended all-square.

Bleyendaal and Williams exchanged penalties within 10 minutes of the restart, and while the game might have been short on true attacking class, intensity levels were high-octane as Leicester unquestionably went up a level after half-time.

Roberts then broke from inside his own 22, and after play went through several pairs of hands, Leicester gained a penalty after Munster prop John Ryan infringed, and Williams' fourth successful penalty put Tigers ahead for the first time.

Zebo was then punished for taking out Thompstone after the Leicester player had kicked ahead, and Williams once again accepted his opportunity, before the late drama that saw him strike from inside his own half after Scannell crossed to thwart Munster's victory hopes.