A youthful Leinster side recorded an emphatic 37-10 win over Northampton Saints at Franklin’s Gardens in the European Rugby Champions Cup on a night when England captain Dylan Hartley, on as a second-half substitute, was punished with a red card for a swinging arm tackle on Sean O’Brien.

Hartley, no stranger to controversy in his career, was shown a red card by referee Jerome Garces after 58 minutes for a vicious arm to the back of O'Brien’s head.

It all came in front of watching England coach Eddie Jones who - by giving Hartley the England armband - had seemingly tempered the notoriously fiery hooker who has 54 weeks of bans to his name.

It was just what Northampton did not need after a week where their handling of a head injury suffered by George North at Leicester last week came under severe scrutiny.

Garry Ringrose, Sean O’Brien, Rory O’Loughlin, Jamison Gibson-Park and Isa Nacewa all crossed the Northampton tryline as Leinster recorded a bonus-point victory that leaves them in pole position in Pool 4 on 11 points.

Leinster had the home fans worrying about a repeat of the 40-7 thrashing they dished out at this ground three years ago by scoring their first try after just two minutes.

It was all made to look so simple as Rob Kearney ghosted through a gap before his pass sent Ringrose under the posts, giving Nacewa an easy conversion.

It was all the visitors in the early stages and Nacewa soon extended their lead to 10-0 as he slotted a penalty, after their scrum marched Northampton backwards.

Ross Byrne replaced Joey Carbery after 15 minutes as the Leinster fly-half exited with an ankle knock. 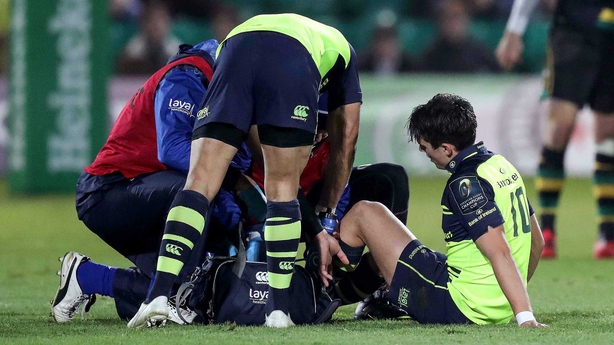 Stephen Myler then put Saints on the board with a kick of his own after 19 minutes before Jamie Elliott was just unable to hold on to Mikey Haywood's tricky pass.

Josh van der Flier was then bundled into touch after attempting a cheeky run down the blindside before the hosts had a bigger let-off just before the break.

O'Brien appeared to have scored the visitors' second try after picking up his own kick ahead, but replays showed him to have knocked on in the act of doing so.

Northampton levelled five minutes after the restart when JJ Hanrahan flung a wonderful pass to the right to allow Ahsee Tuala to score in the corner, with Myler converting from the touchline.

Nacewa quickly put Leinster back in front, however, with his second penalty and their forward dominance allowed them to wrest back control.

They extended their lead when O'Brien powered his way over from close range after Luke McGrath was stopped just short and Nacewa's conversion took the score to 20-10.

Then came the night's big moment of controversy as Hartley was shown red for his late hit on O'Brien, with his departure effectively ending his team's chances.

Leinster added a third after 66 minutes when two young replacements combined, as Byrne's pinpoint cross-field kick picked out O'Loughlin on the left wing for a comfortable finish.

Nacewa could not convert this time, but the visitors claimed the bonus point with five minutes left as Gibson-Park scored a brilliant individual try down the left wing.

Northampton finished the match with 13 men after George Pisi was sin-binned for a dangerous tackle on Nacewa, who piled on the misery for the hosts by scoring off the final play.