Rampant Australia targeted George Ford repeatedly and forced openings at will, but they were aided by passive opponents who were quickly reduced to fire fighting at every turn.

Once again drawing on their resolve, however, injury-ravaged England clawed their way back with an opportunist score from the superb Jonathan Joseph the beginning of the end for the tourists.

Joseph's vision and execution created a second for Marland Yarde and the foot was pushed further into the Wallabies' throats when Ben Youngs used his wits to dart over, before Joseph completed the rout.

The win means Jones' England have drawn level with the 14-Test winning run set by Clive Woodward's World Cup winners in 2002-03 and extends their mastery over the Wallabies to four successive matches.

For the first time since 1992 they have finished the year with an unblemished record consisting of the 13 victories masterminded by Jones and end 2016 in second place in the global rankings, holding off Australia's challenge for their position behind New Zealand.

After his bitter war of words with Wallabies coach Michael Cheika that brought the build-up to the final autumn international at Twickenham to life, Jones was able to claim bragging rights over his former Randwick team-mate.

The scrum had provided one of the battlegrounds for the coaches' verbal exchanges, but it was largely a sideshow to a pulsating international that saw Nathan Hughes grow in stature on his full debut, proving a fine deputy for the injured Billy Vunipola.

Jones sent England out against Australia with orders to "break them mentally and physically" and while that objective was ultimately achieved, the start was a vastly different story. 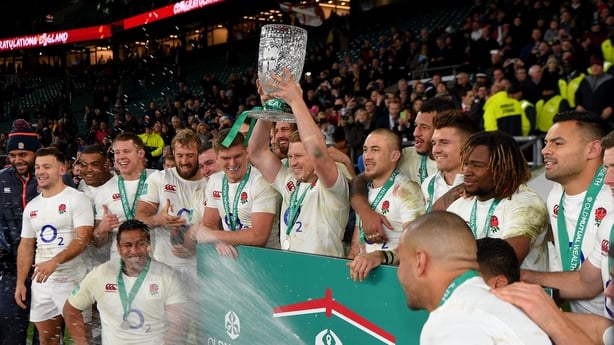 Australia left as many as 10 points begging in the opening five minutes alone after Foley missed a simple penalty and a knock-on from David Pocock saw a try for Tevita Kuridrani ruled out.

Mistakes from Owen Farrell and Mike Brown gave Kuridrani his chance, and it was an error from Dylan Hartley that enabled the Wallabies to surge ahead in the next passage of play.

The ball bounced off Hartley's leg in the scrum and Australia capitalised with ruthless efficiency by quickly moving the ball left via a long pass from wing Dane Haylett-Petty for Naivalu to stroll over.

The Wallabies broke downfield at will in a resoundingly one-sided opening quarter that saw Sekope Kepu and Kuridrani denied tries due to inconclusive grounding.

England could hardly have envisaged a worse start with the 10-point deficit flattering them, but suddenly they exploded into life with Ford breaking downfield midway through an end-to-end sequence of play.

Yarde was unable to win a foot race once Ford had chipped ahead, but the hosts persevered and were rewarded by a second Farrell penalty that acted as the prelude to their first try on the half-hour mark.

Kepu dropped the ball in midfield, although it was scrum-half Nick Phipps who was truly at fault for the error, Farrell stabbed onwards and Joseph sprinted ahead, capitalising on a kind bounce to cross under the posts.
For the first time England led, their determination hauling them back into contention, but it was short-lived as Foley landed two penalties.

The match was finely-poised as the second half began and it was the Grand Slam champions who landed the next blow, big carries from Mike Brown and Hughes stretching Australia.

Faced by ample gold shirts, Joseph held the ball for as long as possible before skilfully stabbing through a kick that Yarde was able to touch down.

Five minutes later and England were over again, Hughes' power and athleticism hurling Australia backwards and when a penalty was awarded, Youngs sped off and dummied Phipps before weaving over.

Farrell landed another penalty and the Wallabies now looked a pale shadow of the side that had ran amok in the first half. Instead, it was England pouring through holes with Hughes an increasingly influential figure.

Joseph and Joe Marler slipped off tackles, allowing Kepu to charge over after showing a surprising turn of pace, but Joseph then picked off a poor pass from Pocock to complete the rout.