Johan Erasmus declined to read much into Munster’s position at the top of the Pro12 table, insisting the standings at this stage of the season are “secondary”.

The South African saw his side claim their fifth league victory in a row against Glasgow on Friday night with Ian Keatley dropping the winning goal with three minutes to go.

The visitors looked to have lost out on the four points when two Warriors tries in the final quarter overturned a 13-3 half-time lead.

However, a typical Munster play allowed out-half Keatley, who kicked 11 points, including converting Andrew Conway's early try, to move into position for a drop-goal that earned a 16-15 win in Scotstoun. 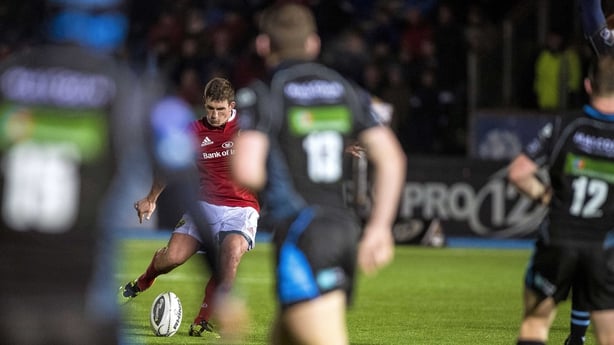 “The table at this stage is almost secondary,” Erasmus told RTÉ Sport.

“The way we’re building momentum and getting there [is more important]. We had to get the monkey off our back from last year, they properly smashed us.

"[It was] definitely a grind, eventually grinding it out got us a result.

"But I think both sides were really committed to try and get the win so we’re happy, even if it was an ugly win we’re happy.

"We’ll go back realistically and look at the performance in the different departments.

"I think we won’t see a great performance but we’ll see a gutsy performance."