The veteran number eight made some key defensive plays as Pat Lam's men ended a three-match losing streak against Welsh opposition this season.

John Cooney's final kick of the first half gave Connacht a 10-7 lead at the break, adding to his earlier try from an advancing scrum.

Cardiff had cancelled out that seven-pointer almost immediately with Tom James' intercept effort.

However, a Cooney penalty and Bundee Aki's first try of the campaign gave the hosts some breathing space in the third quarter and they eventually sent the 6,190-strong crowd home happy as the Blues were left to rue a high error count.

Connacht were the early aggressors, recent Ireland debutant Niyi Adeolokun making a half-break to set up a decent period of attacking pressure. However, a couple of mistimed lineouts and forward passes let Cardiff off the hook.

The Blues scrambled back to deny Stacey Ili after lovely hands from the hosts' back row had released the winger for a kick chase, but the resulting five-metre scrum saw Connacht drive powerfully over the line, with returning scrum-half Cooney getting the touchdown. 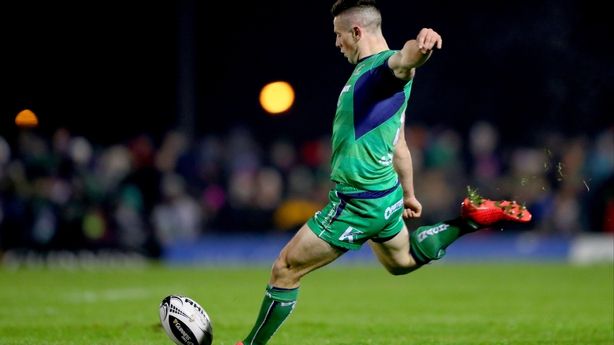 The try-scorer added a fine conversion from the left wing, yet Connacht blundered from the restart, Jack Carty's looping pass picked off too easily by James for a simple run-in from 15 metres out. Steve Shingler converted for seven points apiece.

Suddenly, it was Cardiff dictating as their centres Willis Halaholo and Rey Lee-Lo punched holes in the home defence. A knock-on denied the visitors a close-range try before Shingler sent a scrum penalty wide.

It was a scrappy second quarter, pockmarked by handling errors from both sides.

The Blues broke up Connacht's momentum with some well-judged ruck poaches and penalties before a forceful late scrum allowed Cooney to restore the province's lead from in front of the posts.

The frosty conditions made for a hard slog on the resumption, Connacht managing to add to their lead courtesy of a second Cooney penalty, punishing George Earle's early tackle on Conor Carey.

Cardiff fell further behind by the hour mark, Adeolokun snapping up turnover ball from Matthew Morgan and kicking through. Connacht piled forward and good hands out to the left saw a tackled Tiernan O'Halloran pop the ball back for Aki to crash over, with Carty missing the difficult conversion.

Cardiff were unable to respond, despite countering impressively from a loose Carty kick and then going close from a terrific 70th-minute backs move. Adeolokun did just enough to thwart replacement Morgan just inches from the whitewash, while South African out-half Marnitz Boshoff came on to help Connacht seal the result.