Ireland bossed territory and possession but failed to repeat their Chicago heroics as they lost 21-9 to an ill-disciplined New Zealand in Dublin.

Joe Schmidt's side failed to convert a host of half-chances to add to the historic 40-29 win they achieved over New Zealand in the United States a fortnight ago, letting the All Blacks off the hook at the Aviva Stadium.

New Zealand had Aaron Smith and Malakai Fekitoa sin-binned while conceding 14 penalties but still managed to escape with the win.

Centre Fekitoa plundered two tries to add to his yellow card, with world player of the year Beauden Barrett back on form to claim a score of his own. 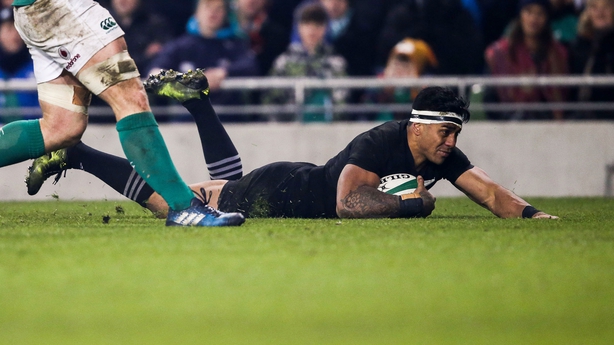 Ireland boasted 67% possession and 70% territory, but only wound up with three penalty goals to show for it.

The All Blacks were stung by their first-ever defeat to Ireland at Soldier Field. While New Zealand are hardly back on form, they did sneak out of Dublin with the win.

New Zealand unleashed full fury from the outset, retaining their kick-off and hurtling into every skirmish.
Murray miscued his grubber to undermine an excellent Ireland turnover, and the All Blacks pounced.

The out-of-sorts Aaron Smith threw a wayward pass to hand Ireland a chance next though, then knocking on at a lineout to boost the hosts' hand still further.

Jamie Heaslip powered over counterpart Kieran Read, and Sean O'Brien thundered for the whitewash. The Leinster man surely saw himself scoring - but somehow Barrett hauled him in to hold him off the ground. 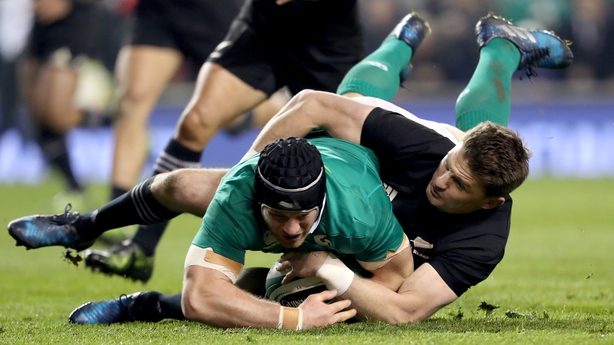 CJ Stander bullocked on from the scrum, but was again denied over the line. Ireland opted for pragmatism, with Sexton converting a penalty to trail 7-3.

Ireland then lost Robbie Henshaw, wiped out unwittingly by Sam Cane as he spun in a tackle. Sexton was left incredulous that Cane was not hit with more punishment than a simple penalty.

"What? A penalty? But the player's on the stretcher," Sexton told referee Jaco Peyper.

Henshaw raised a thumbs-up to the crowd as he departed on a motorised cart, with Leinster's greenhorn Garry Ringrose forced into the number 12 slot for just his second cap.

Barrett chipped Ireland's line, collected and fired off a no-look pass - but Andrew Trimble read it, and so nearly intercepted for what would have been a canter home. The Ulster wing's knock-on denied that attack, but New Zealand were shortly on the scoresheet again.

Barrett ghosted in off a scrum under worryingly little resistance, save Sexton's last-gasp tackle that proved in vain.

TMO Jon Mason responded in the affirmative when asked by Peyper "Can you see grounding on the grass?" when it appeared Sexton had rolled Barrett and stopped him dotting down.

Ardie Savea replaced Sam Cane as the injuries piled up.

Ireland wasted a gilt-edged platform with a cheap offside rolling a maul, then Jackson punted a penalty as the hosts had to settle for a three-point gain from the yellow card. 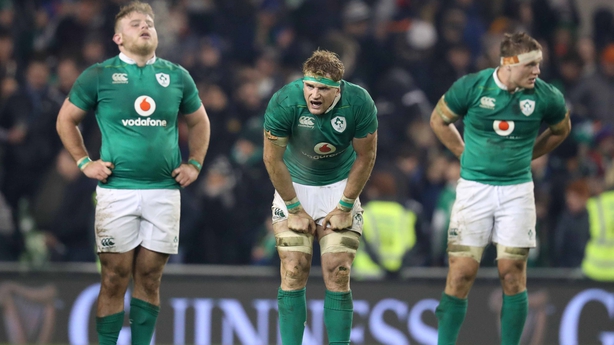 CJ Stander bulldozed Fekitoa, but his night was quickly cut short due to a suspected concussion. The Munster star failed a head injury assessment (HIA) and did not return, with Josh Van der Flier into the action.

Barrett was denied a second try when rightly judged to have knocked on in dislodging the ball from Jackson's grasp. And so the tie remained finely poised with New Zealand 14-6 ahead at the break.

Fekitoa was sin-binned for a crude high tackle on Simon Zebo, leaving New Zealand down a man for the second time in the match.

Ireland wasted two penalty lineouts, first from a cheap knock-on and then after Van der Flier forced an offload that simply was not on.

Again New Zealand escaped without their try-line being breached though, as Kearney just could not send Donnacha Ryan home.

Jackson fired over a penalty amid yet more Irish pressure, to leave New Zealand leading 14-9 on the hour.
Finally Ireland were within one score - but then New Zealand turned it on.

Replays suggested Barrett's pass moved forward, but Peyper had few qualms in opting not to call on the TMO.

Ireland captain Best took the hugely unusual step of approaching Peyper while Barrett lined up his conversion, breaking standard protocol of remaining behind the try-line.

"There's too much at stake," said Best in asking for a referral before being waved away, as Peyper's decision had to stand.