Saturday's 40-29 triumph over the All Blacks stunned the rugby world, ending a century-long losing streak that dominated the build-up to each game between the sides.

Now, though, the monkey has been firmly dispatched from the backs of the men in green, and with it the aura of invincibility enjoyed by New Zealand. 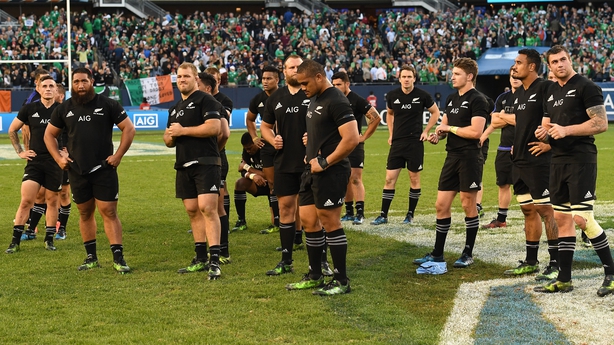 "These are teams we would not fear. Now we've actually beaten New Zealand.

"That's where Ireland should be. We are a major rugby power. We've won the Six Nations a couple of times recently and our teams have won European Cups.

"This is a professional Irish team that want to be bench-marked and take on the best in the world. Until they finally got past New Zealand that was always going to be something that loomed bigger in our minds."

"This is a professional Irish team that want to be bench-marked and take on the best in the world. Until they finally got past New Zealand that was always going to be something that loomed bigger in our minds."

Steve Hansen's world champions will have the opportunity to right the ship in Dublin in two weeks' time and, while another victory against the All Blacks might be too much to ask, MacNeill believes it is important to show that this weekend was not a one-off.

"They are all about setting standards and they really set a standard yesterday. What was exciting about yesterday was that it seemed like a real move forward for this team.

"Having won two (Six Nations) championships, the team is rebuilding, particularly in the backline post Brian O'Driscoll and Gordon D'Arcy, so to score five tries against the All Blacks will be really satisfying.

"So whatever about the result of the game in two weeks, what will really be important is that we move forward and compete, that this isn't a one-off."

With the likes of Sean O'Brien, Peter O'Mahony, Paddy Jackson and Keith Earls all not involved in the matchday 23, the ex-Leinster back believes the talent at Schmidt's disposal offers Irish fans great hope for the coming season.

"I don't think we should be afraid of that (expectation). Sometimes as Irish people we maybe shy away from that, but there's also a place for us to be confident in our abilities.

"We have so many quality players. There's loads of top guys who didn't even get into that 23-man squad, so I think we're in a great, great place.

"We should have a huge amount of confidence now for the rest of the November internationals and hopefully Six Nations as well."