Dave Kilcoyne sent a timely reminder to Ireland coach Joe Schmidt with a terrific two-try performance in Munster's 33-0 Pro12 bonus-point win over the Ospreys in Cork.

The loosehead prop and man of the match pressed his international claims as Munster thrilled the 8,008 home crowd by ending the Ospreys' four-match winning run and moving themselves temporarily to the top of the Pro12 table.

Early tries from Kilcoyne and Darren Sweetnam set Rassie Erasmus' men on their way to a 14-0 interval lead, with the hosts winning the kicking battle and the contact area.

Winger Sweetnam threatened in the air and with the boot in the opening exchanges at Irish Independent Park, with the Ospreys struggling to gain a foothold as their line-out completely malfunctioned. 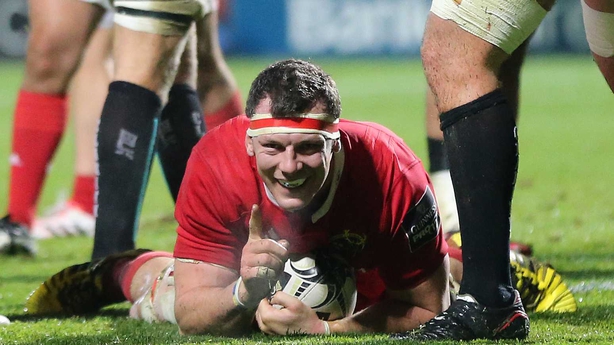 Peter O'Mahony gave serious momentum to a drive in the 22 and after the ball was moved wide to the right, prop Kilcoyne muscled over from a couple of metres out.

Tyler Bleyendaal converted the seventh-minute try with a sweet strike and fared even better with a touchline effort, topping up Sweetnam's 14th-minute try in the right corner from a flat Duncan Williams pass.

Showing two enforced changes from last week's derby win over the Dragons, the Ospreys lacked urgency and fly-half Josh Matavesi was poor with his tactical kicking.

A Darren O'Shea ruck offence ruined a promising Kilcoyne-inspired attack for Munster, while the Ospreys - propelled forward by Tom Habberfield's quick tap - blew their best chance before half-time when Jack O'Donoghue turned them over close to the Munster posts. 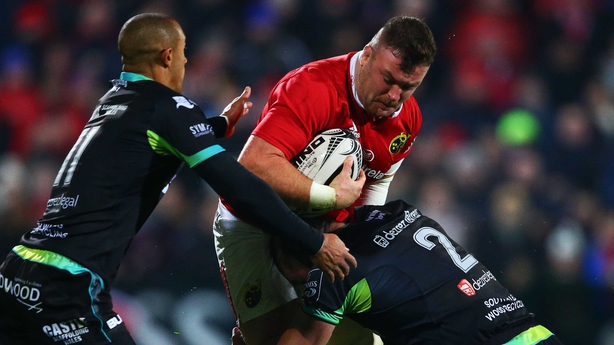 A clash of heads ended Jaco Taute's night prematurely and saw Dan Evans have a spell off the pitch. Although the Ospreys improved on the restart, Matavesi's loose pass in his own 22 was dribbled forward and touched down by winger O'Mahony for an unconverted try.

The Ospreys bench added some zip to their play, replacement scrum half Brendon Leonard having a try ruled out for offside on the hour mark. Sweetnam also had to react smartly to bundle Leonard into touch on a breakaway.

However, normal service was resumed when Kilcoyne bulldozed over from close range having made two ground-gaining carries before that.

Bleyendaal converted and also added the extras to Copeland's pick-up from a ruck, the Munster scrum providing the platform with new Kiwi hooker Rhys Marshall involved off the bench.

Munster flourish in front of sell out crowd in Cork! @robocopey among the try scorers..