Donal Lenihan said Joey Carbery's youthful exuberance could rub off on the stalwarts in the Irish camp as "the story of the season" gears up for a fairytale appearance against New Zealand in Chicago.

Paddy Jackson’s withdrawal from the squad for personal reasons has given Leinster's 20-year-old out-half a genuine opportunity to feature in Saturday night's Test.

His astonishing rise from Ulster Bank AIL rugby with Clontarf to a potential face-off with the best side on the planet has been swift and seamless, and Lenihan said he has the mentality and ability to survive at the highest level.

“I’m a huge believer in the quality of the All-Ireland League," the former Ireland manager told RTÉ 2fm's Game On.

He has been the story of the season so far

"There’s a lot of very good players who play in it week in week out. Joey Carbery hadn’t made the Leinster  academy last year. There was two or three out-halves ahead of him.

"But I think by virtue of the fact that he got regular game time week in week out, that has been a huge plus for him.

"Nothing seems to faze him. He’s still only 20 years of age. The exuberance of youth sometimes gets you over a lot. The older you get, you know the pitfalls, you start worrying about things.

"You don’t have that when you’re younger. When you get players like that into a squad I think it rubs off on even the more experienced players.

"He has been the story of the season so far. It’s phenomenal to think he was with Clontarf in the All-Ireland League final last May and now he could be playing against Beauden Barrett or Aaron Cruden." 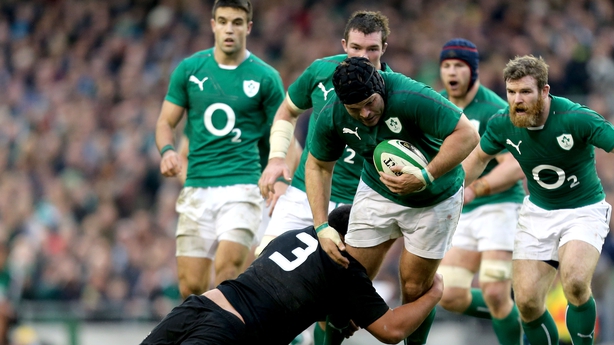 Ireland will face the All Blacks twice in the space of a fortnight, welcoming the world champions to Dublin on 19 November after this weekend's Stateside collision.

It's a daunting prospect, but Lenihan insisted, no matter how these games go, the experience of playing such an outstandingly gifted outfit will prove invaluable.

"There’s never been a team like this New Zealand side," he said.

"Normally teams peak. They won the World Cup a year ago. They lost five or six of the best players in the world at that time and if anything they’ve got better.

"They never drop off in intensity. It’s a huge ask for Ireland but you have to measure yourself against the best. Regardless of the outcome of the game those young Ireland players will be better as a consequence of meeting New Zealand twice."