Australia coach Michael Cheika wants his team to dream big ahead of the autumn internationals.

Cheika's side begin their tour against Wales on Saturday and finish with a Twickenham date against England on 3 December, with a visit to Ireland on 26 November on the schedule.

And the man leading the Wallabies' charge is in no mood to talk down their goals.

Since losing the World Cup final to rivals New Zealand a year ago there have been even tougher times - a six-match losing streak that included a 3-0 whitewash by England and a 42-6 humbling from the All Blacks.

But results have been on the up as Cheika overhauled his squad, and ambitions are heading in the same direction.

"I think that it's very important for players to have dreams of achieving the bigger-picture items. I really do, I believe that's important," the former Leinster coach said at his arrival press conference in London.

"If you don't have those dreams inside of you, then what are you doing it for?

"That's in the background, but that will only come to fruition when we're excellent every day and our players are learning.

"We're really trying to do the right thing, not just for the short term, but also for the medium term."

Cheika flew out a day after his team following an operation on an injury sustained in a collision with winger Israel Folau. 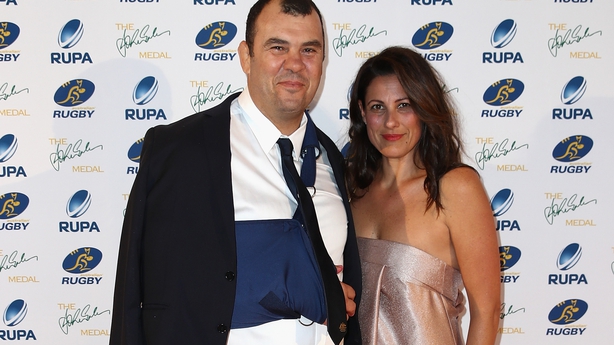 The incident occurred during a warm-up prior to the Wallabies' defeat by New Zealand at Eden Park 10 days ago, when Cheika made an ill-fated decision to gather a high ball.

He initially sought to keep the other party's name under wraps, but scrum-half Nick Frisby has since pointed the finger at Folau.

Cheika referred light-heartedly to the moment on Monday.

"Izzy's still on the tour, so he's all right. He didn't get dropped," he said.

"The important thing was that he didn't get injured. The coach can't be injuring the players.

"I have a new empathy for players recovering from reconstructive surgery because it's quite painful. Maybe it is because I am a little bit older."