Munster backed up their emotional Champions Cup thrashing of Glasgow Warriors last week by returning to the PRO12 to grind out a 15-14 interprovincial comeback victory over Ulster at the Kingspan Stadium.

Impressively for the visitors, they came back from trailing 14-0 just before half-time with Rory Scannell's 74th-minute drop goal putting the southern province in the lead for the first time and winning the match.

It consigned Ulster to their second successive PRO12 defeat to provincial opposition and also inflicted on them their first home league reverse of the season.

Even though Ulster scored two first-half tries - from Charles Piutau and Rob Lyttle, both converted by Paddy Jackson - and led 14-5 at the break, Munster ground their way back and deserved their win after dominating the second 40 minutes leaving Ulster to rue their losing bonus point.

On the occasion when Ulster paid tribute to Anthony Foley by erecting a plaque to his memory in the away changing room - a response to the gesture made by Munster at Thomond Park following Ulster player Nevin Spence's death in 2012 - both sides still went at this interprovincial tie with the usual commitment even though the teams were diluted of a number of frontline internationals.

Ulster got things going after just four minutes when Paddy Jackson's cross-kick bounced back off the leaping Craig Gilroy and Andrew Conway with Charles Piutau gratefully accepting the rebound to score his first competitive try for Les Kiss' side.

Jackson converted and then Munster turned up the pressure only for Ian Keatley's long-range drop goal to miss the target and the out-half then made a complete hash of his 14th-minute effort.

Despite Munster applying all the pressure, the next score came from the home side, on a rare sortie into the southern province's territory, when replacement Robert Lyttle danced his way past Tommy O'Donnell and Keatley to dot down at the posts. 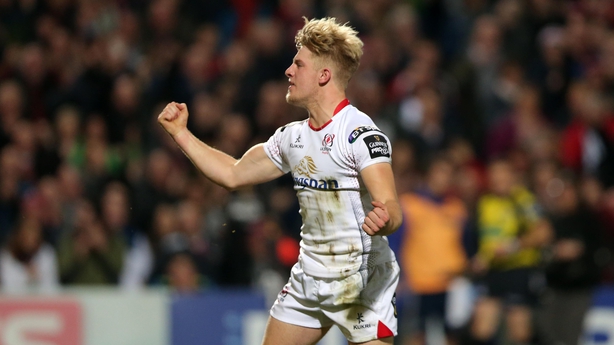 Jackson again converted and Ulster led 14-0 after being under pressure for most of the game. Still, the visitors had the final say in the half when they worked Rory Scannell over in the corner on 40 minutes.

Keatley missed the extras and the half ended with Ulster leading 14-5. Keatley then hit the posts with a kickable penalty chance in the opening seconds of the new half.

It took until five minutes after the hour for the next score to come when centre Jaco Taute barged over from close range after Munster had driven from a lineout up to the Ulster line, Scannell's conversion cutting the home side's lead to just two points.

Ulster needed to score next but Jackson sent his 68th-minute penalty wide and Munster punished them when they took the lead for the first time with Scannell's 75th-minute drop goal.