Dan Tuohy will make his first start in almost a year for Ulster in their Pro12 derby at Kingspan Stadium on Friday night [7.05pm].

The Ireland lock suffered ankle ligament damage in a 14-7 win over Edinburgh last December, eventually missing out on the Six Nations and undergoing a long, frustrating road to full fitness.

He captained Ulster A against Leinster in the British & Irish Cup two weeks ago, and Les Kiss will send him into battle under the Friday night lights.

Wiehahn Herbst is also back after a long lay-off. The South African prop hasn’t featured since the Champions Cup defeat at Saracens last January.

Tuohy will join Franco van der Merwe in the second row, while Robbie Diack also returns to the starting team.

Diack is selected alongside Sean Reidy and Roger Wilson in the back row.

Ruan Pienaar and Paddy Jackson are retained in the half-back positions, with Darren Cave joining Luke Marshall in midfield.

Tommy Bowe and Craig Gilroy have been elevated from the bench to starting berths on the wing, so Charles Piutau switches to full-back.

Conor Joyce could make his first appearance for the province in over two years after being named among the replacements. The 23-year-old back row's last outing was the 17-19 win over Munster at Thomond Park back in May 2014.

As expected, Iain Henderson will also miss this weekend's action due to a shoulder injury picked up against Exeter. 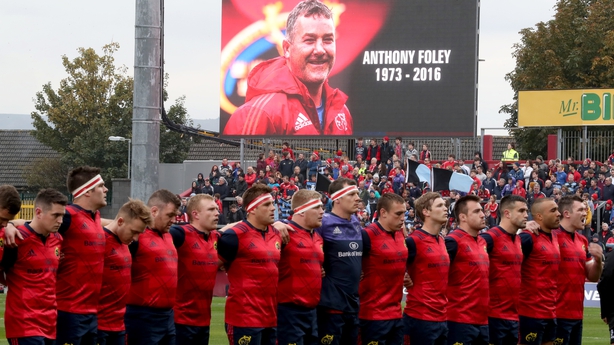 The province paid a fitting tribute to the late Anthony Foley with a 38-17 bonus-point win over Glasgow at Thomond which was completely overshadowed by the tragic passing of their coach in Paris.

Jack O'Donoghue starts at number eight, while Duncan Williams and Ian Keatley form a half-back partnership, with Ronan O'Mahony and Andrew Conway both returning to the back three. Williams will make his 100th Pro12 appearance at Kingspan.

Academy hooker Vincent O'Brien and Young Munster scrum-half Abrie Griesel are both named on the bench and could make their senior debuts for the province.

O'Brien starred for Ireland at this year's World Rugby Under-20 Championship, while Griesel, a former South Africa Under-20, has trained with the squad in recent months.

Tyler Bleyendaal will be rested for the derby, while Simon Zebo, Conor Murray and CJ Stander - who fly to Chicago on Monday for Ireland's Test with New Zealand - are not in the squad.

Keith Earls is serving a two-week suspension for the the red card he received last week.