Munster's director of rugby Rassie Erasmus said his overriding emotion was one of relief after the players produced a stirring display to thump Glasgow Warriors 38-17, just a day after the province's former captain and coach Anthony Foley was laid to rest.

The home side racked up five tries in easily brushing aside the challenge of their Champions Cup rivals before a raucous capacity crowd of 26,500.

Munster's performance was all the more remarkable as they played with 14 men for an hour after winger Keith Earls was red-carded for a dangerous 18th-minute tackle on Glasgow hooker Fraser Brown.

Man-of-the-match Tyler Bleyendaal, centre Jaco Taute and Simon Zebo all touched down before half-time, while Munster were awarded a penalty try soon after the restart to secure the bonus point and Rory Scannell claimed try number five late on.

But the game was entirely overshadowed by Foley's death, with a minute's silence impeccably observed before the start.

Spectators in the West Stand at Thomond Park held up placards which spelt out Foley's nickname 'Axel' along with the number eight shirt, and all Munster's playing shirts had 'AXEL' sewn on their red shirts under the club crest. 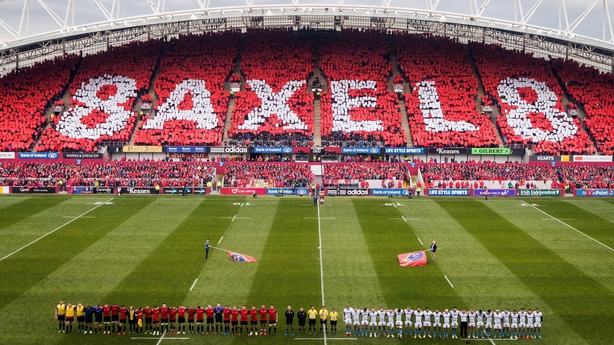 The Munster Rugby Supporters' Club Choir performed 'There Is An Isle' on the pitch which was greeted with a standing ovation.

Soprano Sinead O'Brien then joined the choir to perform 'Stand Up And Fight', which the Munster faithful, decked in their traditional red, stood and sang along to.

"I was expecting that would come through, but not in such a mature way, for the players to do it so quickly after something tragic that happened to Axel, so I am relieved"

Erasmus said: "I feel relieved because of the unknown element about the week. The territory we got into this week and circumstances, different things, I did not know, myself, how we would react, how the players would react, even the referee or the opposition.

"It was such a weird week which you can't really prepare for. Even with the warm-up, I wasn't even sure what we would get out of this.

We had a good chat last night and this morning about what we were going to try and achieve, not even result-wise, but more the way we wanted to play.

"I was expecting that would come through, but not in such a mature way, for the players to do it so quickly after something tragic that happened to Axel, so I am relieved." 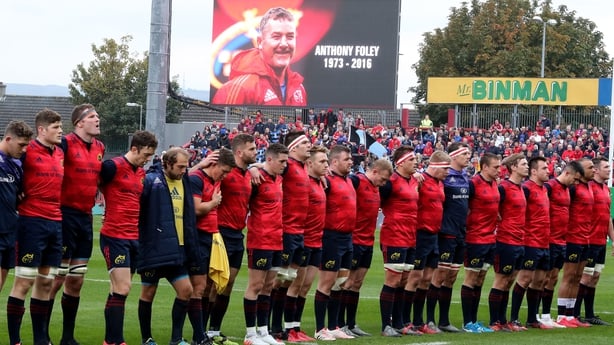 The South African-born Erasmus admitted it had been a hugely emotional occasion, saying: "The tough things are the small things. You get into the bus to the field, Axel's seat is there. You get into the changing room, all the little things that remind you.

"Then you get out to the field and the Munster people, the Irish people, do things that are very personal, with so much emotion and then I wasn't sure how that would impact on everyone, from the opposition to us, so I am relieved the guys handled it like that."

The Warriors were exemplary in paying their respects to Foley, with Townsend and fellow coach Dan McFarland attending Friday's funeral in Killaloe, County Clare, and the players also visiting the Thomond Park shrine to the late number eight.

"As coaches we obviously focus on the rugby, but we are also part of mentally preparing our players, getting them to believe in themselves and go out there and play," said Townsend, whose side were trailing 31-3 before final-quarter tries from replacements Pat MacArthur and Mark Bennett gave them something to play for.

"This was different and we were focusing on the rugby side of it. We talked about what we expected today, with the crowd noise, the whole atmosphere. I felt the players were focused in the meetings and training sessions. We prepared really well.

"Just from the beginning of the game we didn't defend that well. When we had the ball we looked like individuals, rather than sticking to what we know works. Munster looked like a team today.

"It's the Champions Cup. We know every game is difficult. This was really difficult today. We have missed not picking up any points today and given one of our rivals five points. It will be tough from here."