The remains of Anthony Foley have arrived at St Flannan’s Church in Killaloe for his removal.

The former Munster and Ireland star will be reposing at St Flannan’s until 8.30pm tonight, ahead of his funeral at noon on Friday and burial at Relig Nua in the County Clare village.

A large number of prominent figures in the rugby community have gathered to pay their respects, including Ireland coach Joe Schmidt.

Former Munster, Ireland and Lions star Keith Wood, a close friend of Foley, was among the first to queue outside the church on Thursday morning.

The family issued a statement to urge people to come to the church early, given the length of queues.

"The crowds attending today are as vast as we could have anticipated," it stated. 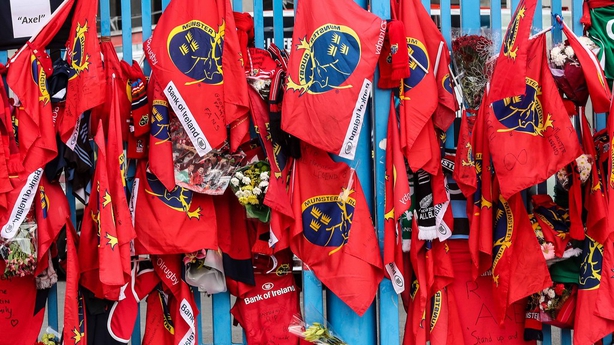 Foley’s body was flown back to the country on Wednesday after his death in Paris at the weekend, where his Munster side was preparing was preparing to face Racing 92 in the Champions Cup.

An autopsy carried out in the French capital at the weekend revealed the 42-year-old died of an acute pulmonary oedema.

With thousands expected at Friday’s funeral, Gardaí have opted to deploy a traffic management plan, and a one-way system will be in place around Killaloe.

Three park-and-ride facilities will also be in operation.

RTÉ2 will screen a one-hour highlights programme of the 2006 Heineken Cup final between Munster and Biarritz this Saturday at 6.25pm in memory of the legendary back rower.