The IRFU has confirmed the sudden passing of Munster head coach Anthony Foley.

The 42-year-old passed away overnight in Paris ahead of today’s Champions Cup fixture between Munster and Racing 92.

“It is with deep regret that the Irish Rugby Football Union and Munster Rugby must advise of the passing overnight of Munster Rugby head coach Anthony Foley, at the team hotel in Paris,” the official statement read.

“Munster Rugby management are liaising directly with Anthony's family and will provide them with any assistance and support required.

“The IRFU and Munster Rugby pass on our deepest sympathies to all of Anthony's family and friends and ask for privacy for the family at this sad time." 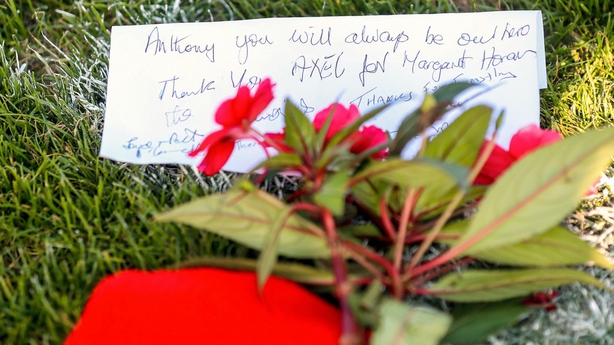 They have also confirmed that today’s match will be rescheduled as a result.

The Clare native won four AIL titles on the trot in the mid-90s and made his first appearance for Munster against Swansea in November 1995 in the province’s first outing in the Heineken Cup.

It is with great sadness that we bid farewell to our coach, former captain, colleague and friend today, rest in peace Anthony Foley.

In a Munster career that spanned 13 years, Foley was the first player to surpass 200 appearances and took over from Mick Galwey as team captain. He led the province to the the long-awaited Heineken Cup victory in 2006 and announced his retirement following their second success in the competition two years later.

The powerful backrower was a regular on the scoresheet and scored 39 tries in the red of Munster.

Foley made his international debut for Ireland in 1995 and won 62 caps in a career that spanned a decade.

In a statement, the CEO of Munster Rugby, Garrett Fitzgerald, called Foley the "embodiment" of the club.

"We are shocked and deeply saddened by today's news and the sudden passing of a Munster Rugby great, our Head Coach, former player, colleague and friend Anthony Foley," he said.

"Our immediate thoughts are with Axel's family, his wife Olive and his two sons Tony and Dan, father Brendan who is here in Paris with us, mother Sheila, sisters Orla and Rosie and the extended Foley family.

"Anthony was the embodiment of Munster Rugby and dedicated his life to the game he loved. From St Munchin's to Shannon, Munster and then Ireland, Anthony was a true rugby great.

"Widely known for his extensive knowledge of the game and rugby brain, Axel brought so much to the province as a player and then a coach.

"A very popular figure off the field, he was an incredibly likeable character with a great sense of humour and he lived life to the full.

"Never a man to back down from a challenge, Anthony's determination on the field was mirrored by his actions off it, always honest in everything he did. His legacy will live on in the next generation and beyond.

"Anthony will be sorely missed and the thoughts from everyone in the game are with his family at this time."

His father Brendan was part of the Munster team that famously defeated the All Blacks in 1978 and his sister Rosie was a member of the Irish women's squad.

He is survived by his wife Olive and two children.