Pat Lam was again bursting with pride after Connacht produced a mammoth performance to defeat French powerhouse Toulouse in the European Champions Cup.

Connacht were ten points down at half-time, but second half tries by Tiernan O'Halloran and Bundee Aki, accompanied by a tough conversion from Craig Ronaldson, saw the Westerners to an epic 23-21 victory at the Sportsground.

And head coach Lam was full of praise for both his player and supporters, telling RTÉ Sport afterwards: “I’m extremely proud of this team and these boys and also our supporters, our province - unbelievable. Biggest crowd we’ve had this year, it got us home.

"The biggest highlight is the fact that we expect to win these games, rather than hope"

“Probably what summed it up was at the end there with two minutes to go – the boys being able to take on guys who are a stone heavier and keep them out.

“The courage to take the hit and look after the ball and finish it was superb.”

Next up for Connacht is Zebre at Stadio Lanfranchi next Sunday, and despite the 82-14 hammering the Italians received from Wasps yesterday, Lam is under no illusions about the test that awaits them. 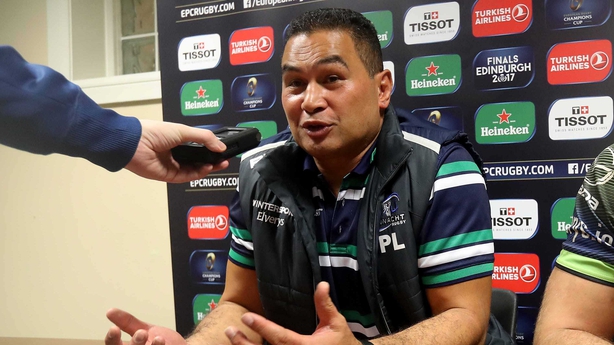 He continued: “They sent a second team to Wasps and you know we watched their body language, it was terrible and they’re going to get it all week, the criticism and that, so they’re  a dangerous beast now.

Aki got the all-important try on 67 minutes and produced an all-action performance despite struggling with an injury all week.

Lam revealed: “He hasn’t trained all week. He’s had a niggle in that leg, but he’s got a big ticker, massive ticker. I mean, him and John Muldoon are big leaders and they’ve both got big hearts.”

Lam then made a statement which highlighted the confidence in the Connacht squad these days. He said: “The biggest highlight is the fact that we expect to win these games, rather than hope.”

Connacht lie in second place to Wasps in Pool 2 and expect to progress to the knock-out stages, and this performance will only strengthen that belief.