Glasgow sent out a statement of intent in Munster's Champions Cup pool with a resounding 42-13 win over Leicester at Scotstouns.

Three tries in eight first-half minutes set them on their way to a thumping bonus-point win over Leicester.

Leonardo Sarto, Fraser Brown and Henry Pyrgos all crossed before the break as Gregor Townsend's side bounced back from Adam Thompstone's early try to secure a 42-13 victory.

Leicester, who received two of the game's three yellow cards, were overwhelmed by their hosts' tempo and relentless pressure on the recently-laid artificial surface at Scotstoun Stadium during the crucial period of the game.

Tigers failed to get on the scoreboard in the second half and Mark Bennett and Sarto each broke away in the final 11 minutes to round off a memorable night for the Scots.

Owen Williams had opened the scoring for the visitors with a penalty before the first major flashpoint in the 14th minute when Matt Toomua tipped Finn Russell over in a tackle which sparked a melee.

The French referee gave a far more considered response, slowly moving towards the big screen and taking several looks at the replay before showing the yellow card. The fact the Glasgow stand-off initially fell on his shoulder saved the Australian centre from a harsher sentence on his Tigers debut.

Stuart Hogg dispensed his own punishment by converting the penalty from just inside his own half.
Glasgow failed to build on their advantage and they were decidedly on the backfoot when Ryan Wilson joined Toomua in the sinbin in the 19th minute for not retreating 10 yards.

Leicester were quick to punish, kicking for a lineout and then driving over with Thompstone eventually credited.

But 14-a-side ultimately suited Warriors as their quick ball blew their English visitors away. Gaps were opening up in the Tigers defence and Sarto picked the ball up to cross after Russell had been thwarted in the 25th minute. 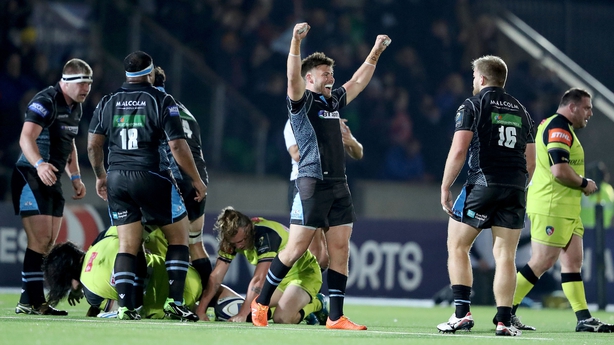 Russell converted as Toomua re-entered the fray but Glasgow maintained their drive and Brown soon burst through the middle of two pairs of Leicester players to touch down.

Sarto, Tim Swinson and Hogg soon had attempts to breach the Leicester lines before scrum-half Pyrgos sneaked round the outside of several bodies to add another try.

Russell missed the chance for a third conversion and Williams reduced the deficit to 22-13 with a 30-metre penalty.

Leicester responded well after the interval but Glasgow kept them at arm's length and showed they could grind out some crucial points when Russell bagged a long-range penalty.

The Scotland stand-off soon sparked an electric counter-attack when he took a quick penalty inside his 22. Sarto produced a thrilling crossfield run before the hosts worked it out to Rory Hughes, who was stopped almost on the try line.

Glasgow kept the pressure on and Logovi'i Mulipola received a 57th-minute yellow card moments after coming off the bench.

Warriors could not immediately capitalise and then settled for an extra three points as Russell kicked over.

But they got their bonus point when Bennett, a last-minute replacement for the ill Alex Dunbar, intercepted a pass on his own 22 and sprinted all the way home, before Sarto scored a near identical try seven minutes later.

Munster are away to Racing on Sunday afternoon (3.15pm).