Paddy Jackson has been backed to prove he has "grown from a boy to a man" in Sunday's Champions Cup shoot-out with international rival Ian Madigan.

Ireland fly-halves Jackson and Madigan will go toe-to-toe in European action this weekend, when Ulster open their pool five schedule at Bordeaux (1pm).

Madigan could find his Ireland chances limited by trading Leinster for Bordeaux in the summer, but Ulster's assistant coach Joe Barakat believes Jackson can lay down a strong Test claim in France on Sunday.

"If you look at Paddy from last year to this year, physically he's almost grown from a boy to a man," Barakat told Press Association Sport of Ulster's 24-year-old playmaker Jackson.

"Physically he's changed and there's a lot of confidence that comes with that change as well.

"He's continuing to improve all the time, and you can't deny his impact on this Ulster team, the way he guides us around and what he demands from these players."

Madigan has been selected to start at fly-half ahead of Lionel Beauxis for the keenly-anticipated clash, which throws up a direct confrontation with Jackson.

The match-up should make for compelling viewing, especially for Ireland boss Joe Schmidt as he mulls the composition of his squad for the November Tests.

Madigan was initially omitted from Ireland's June South Africa tour in light of his move abroad, but was quickly drafted back in when Sexton suffered a shoulder problem.

Ireland's performance director David Nucifora has previously admitted players will be at a "disadvantage" in terms of selection chances if plying their trade abroad. 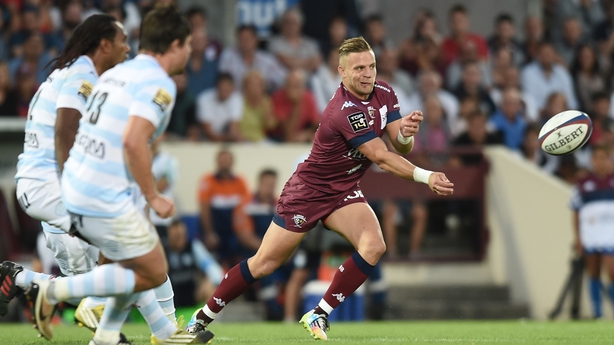 Wing Andrew Trimble and centres Stuart Olding and Luke Marshall can also give Schmidt food for thought with strong performances in France after recent injuries.

Sexton will miss Leinster's clash with Castres due to a hamstring twinge with province and country doubtless hoping his absence is short-lived.

And flanker Sean O'Brien continues the comeback trail from the serious hamstring tear he suffered in February with a run-out for Leinster A in the weekend's British and Irish Cup clash at Richmond.

Ulster defence coach Barakat hailed Jackson's rapid progress in the past year, citing his showings in Ireland's summer battles with the Springboks as central to that jump in all-round performance.

"He was selected as Ireland's starting, standout stand-off in those Tests in South Africa in the summer," said Barakat of Jackson.

"And he realised during those Test matches, 'where I'm currently at is adequate, but is that going to make me dominant?'.

"If you want to go from adequate or acceptable to dominant, there's got to be changes.

"And those changes cannot just be mental, they cannot just be tactical, they've got to be physical, because you want to have a greater impact on the game.

"And he's doing that. He's probably one of the fittest athletes in our squad, he's becoming a good sized athlete.

"You've got to tackle, get back to your feet and keep making good decisions even though you're tired. And he's really getting there."