Young Munster moved to the top of the tree alongside Lansdowne after a gutsy defeat of reigning champions Clontarf.

Young Munster were without Robin Copeland, who has starred for them in recent weeks, but they were able to call on recent Pro12 debutant Dan Goggin who partnered Mark Doyle in the centre with talented teenager Calvin Nash moving to the right wing.

'Tarf made the stronger start in Greenfields, twice hitting the front through the boot of Rob Keogh and an unconverted try from flanker Karl Moran. A purposeful break from Matt D'Arcy then played in winger Keogh for a 35th-minute converted effort.

The Cookies' second try came straight from the restart, the north Dubliners falling asleep as winger Jack Harrington waltzed in for full-back David O'Mahony to convert and put two points between the sides.

That was still the gap at the end of an absorbing, defence-dominated second period.

'Tarf dug deep during replacement scrum half Sam Cronin's sin-binning and although Keogh's 77th-minute penalty edged the visitors back in front, Munsters full-back O'Mahony landed the match-winning kick just two minutes later to seal a rousing 20-18 victory and move Gearoid Prendergast's men level with Lansdowne at the top of the table. 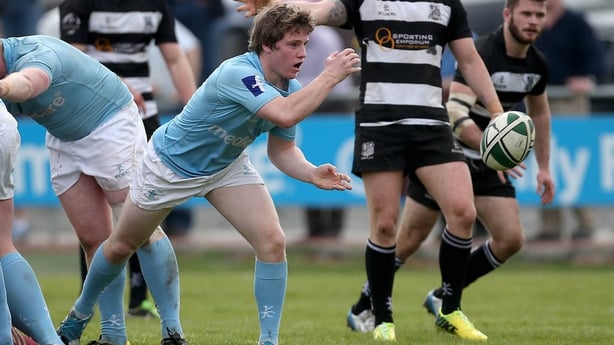 Captain Neil Cronin [above] guided his Garryowen team to a gutsy 16-13 win over Munster rivals Cork Constitution in a ding-dong battle at Dooradoyle this afternoon.

Cronin stepped up to fire home a 72nd minute penalty - his fourth successful kick of an 11-point haul - and make it two narrow victories on the trot for Conan Doyle's young charges.

As they did against Young Munster, Constitution gained the upper hand early on thanks to Tomas Quinlan's fifth-minute penalty and a converted try on the quarter hour from bulldozing second row Conor Kindregan.

However, Con's discipline has been poor in the opening rounds and they suffered their fifth yellow card in 200 minutes of rugby when full-back Liam O'Connell was binned for a high tackle. That came five minutes before half-time and Garryowen scrum half Cronin mopped up with a brace of penalty goals for 10-6.

Centre Andrew O'Byrne's 55th-minute try - his second in as many games - continued the Light Blues' resurgence, although Quinlan set up a grandstand finish with a levelling penalty, 10 minutes from the end.

Cronin then held his nerve to split the posts for the final time and Garryowen determinedly held on to take a tight verdict. They did so despite losing their loosehead prop Niall Horan to injury and playing out the final few minutes with 14 men.

Terenure College and UCD both racked up try-scoring bonus points in an eight-try thriller that went 'Nure's way at Lakelands Park.

James Blaney's men lifted themselves off the bottom of the Division 1A table, with flanker Robert Duke's brace of tries helping them to bounce back from a 29-5 drubbing by Lansdowne.

Terenure made five changes to the side that lost at the Aviva Stadium, with Sam Coghlan Murray and captain Kyle McCoy heading their list of absentees.

UCD were also without some of their Leinster contingent - most notably Nick McCarthy and Barry Daly, who were both on the bench for Leinster last night, while Andrew Porter, Jeremy Loughman and Will Connors were missing from the pack.

'Nure deservedly led 16-7 at half-time, Mark O'Neill and James O'Donoghue getting the plaudits for their interplay in the build-up to winger Robbie Murphy's opening try which went unconverted.

UCD were 13 points behind by the 23-minute mark, Jake Swaine landing a penalty and quick turnover ball saw Swaine grubber through for blindside Duke to ground Terenure's second try.

Ireland Under-20 captain James Ryan led UCD's response, carrying strongly and offloading for centre Jimmy O'Brien to speed through the middle and snap back seven points in the 34th minute. A late Swaine penalty gave 'Nure a nine-point cushion to take into the second half.

Swaine made it 19-7 early on the resumption, but a multi-phase attack from UCD wore down the home defence for full-back Tom Fletcher to touch down on the right. Fit-again Leinster Academy out-half Ross Byrne, who came on as a replacement, could not convert.

It was Terenure's turn to have a purple patch and they strung together two tries to secure their bonus point with 20 minutes remaining. While UCD's Peadar Timmins was in the bin, an advancing maul ended with openside James O'Neill crossing for the hosts.

Duke grabbed his second try of the day, five minutes later, showing his pace again to get on the end of a kick through from winger Stephen O'Neill. Swaine's conversion made it 31-12 before UCD fought hard to take home two bonus points.

Ryan got over for a deserved score, converted by Tim Foley, and then with 'Nure hooker Adam Clarkin yellow carded, the visitors fed Ireland Sevens international Harry McNulty to finish in the corner. There were no further tries in a tense conclusion, though, as 'Nure deservedly prevailed by seven points.