Rassie Erasmus likened Munster's Pro12 victory over Edinburgh to a "horror movie" but believes the bonus-point win at Thomond Park can only be a good sign for the province.

Conor Murray's brace overturned an early Edinburgh lead before tries from flankers Conor Oliver and Dave O'Callaghan wrapped up a 28-14 triumph and maximum points for the home side.

It was a disjointed encounter, which took more than two hours to complete following a number of stoppages, and while director of rugby Erasmus was delighted with the result, he sympathised with the Limerick faithful and praised them for their patience given the fare on offer.

"Especially the last 15, 20 when we played with a prop at flanker, it was really getting long and frustrating. But yes, five points is great.

"The four tries we scored were nice but there were so many others we could have scored. There were simple handling errors and there were times when we had four-on-two when we ran into the player in front of us.

"Luckily, if you play this bad and win, and get five points, it's probably a good sign." 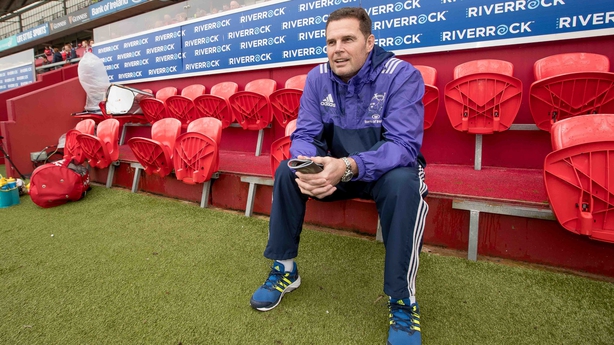 One of the stoppages was the result of an injury to flanker Jack O'Donoghue, who was the victim of an illegal shoulder charge and was taken from the field on a medical cart after 10 minutes of attention.

"I think it's pretty serious," Eramsus conceded of the 22-year-old's condition. "It's tough to say. He's back here after going to hospital but I'm not sure what the scans say."

While dealing with the absences of several international players to start the season, Eramsus has been forced to dig into Munster's academy stock.

And with the likes of Simon Zebo and Tommy O'Donnell likely to be back for next week's game against Zebre, the 43-year-old has gone a long way to improving the depth of talent at his disposal going forward.

"These guys are getting experience, caps under their belts, and handling the pressure so we are building a squad. We have guys close to returning so that's great."