Lansdowne have pushed three points clear at the top of Division 1A following a 29-5 bonus point win over Terenure College.

Mike Ruddock's men now stand as the only team yet to taste defeat after the opening two rounds. Terenure, meanwhile, lie bottom of the table after their second defeat.

Running out on the main pitch at the Aviva Stadium, Lansdowne quickly established control of the scrum through their powerful front row of Peter Dooley, Tyrone Moran and captain Ian Prendiville.

The Terenure scrum coughed up three penalties inside the opening 24 minutes and with their loosehead Kieran Moloney in the sin-bin on the half hour mark, Lansdowne duly forced a penalty try. Scott Deasy converted to add to his earlier penalty, giving the hosts a 10-0 interval advantage.

Defences were on top for much of the second period, however the 2015 champions strung together three tries in the final quarter to claim their second bonus point of the campaign.

Number 8 Max Deegan, returning to league action after his Ireland Under-20 heroics in the summer, crossed the whitewash as did front rowers Ntinga Mpiko and Dooley. Terenure salvaged some pride with an injury-time effort from centre Conor Finn.

St Mary's College claimed the scalp of defending Division 1A champions Clontarf with a fine 23-20 win at Castle Avenue yesterday.

Young out-half Sean Kearns played a leading role once again for Mary's, completing his 13-point kicking haul with the decisive penalty in the 77th minute.

The visitors gave starts to flanker Caelan Doris, who captained the Ireland Under-18 Schools team last season, and ex-Trinity centre and skipper Paddy Lavelle, while Ireland Sevens international Terry Kennedy made the move to full-back.

Kearns converted tries from tighthead and captain Brian McGovern and scrum half Paddy O'Driscoll to give Jamie Cornett's eager side a hard-earned 17-12 interval lead.

In what was a forwards-dominated encounter, O'Driscoll was the only back to cross the whitewash with Tarf's three touchdowns coming from props Vakh Abdaladze and Royce Burke Flynn and hard-carrying number 8 Tony Ryan.

Ryan's score, coupled with a Rob Keogh penalty in the 74th minute, saw the title holders square things up at 20-all, but Kearns' right boot guided Mary's to their first victory of the league campaign. 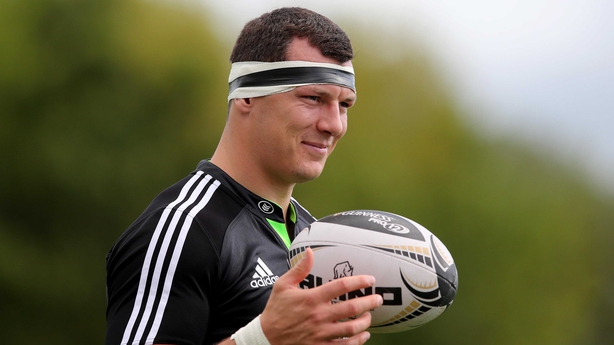 Munster back rower Robin Copeland touched down twice as Young Munster roared their way to a 37-15 bonus point success at Cork Constitution.

Gaining some revenge for last April's semi-final defeat at Temple Hill, blindside Copeland's try on the stroke of half-time had the Cookies leading 13-10.

In a slow-burning first half, a Tomas Quinlan penalty had put Cork Con on course for a 10-0 lead. Ireland Under-20 winger Shane Daly, playing at full-back, crossed in the 20th minute following a smashing break from Cian Barry.

However, Munsters, who brought two busloads of vocal supporters to the game, snapped back with successive penalties from winger David O'Mahony after 23 and 27 minutes.

Copeland's first score, coupled with a penalty try, saw the visitors seize control up front and they were 25-10 to the good before the elusive Daly hit back for Con with his second try in the 63rd minute.

Having been beaten at home by Old Belvedere in a 71-point thriller last week, the Limerick men were determined to make amends on Leeside, and further tries from replacement Alan Kennedy and Copeland sealed their five-point return.

UCD opened their win account in Division 1A for this season by overcoming fierce rivals Trinity on a 23-13 scoreline.

Wingers Adam Byrne and Barry Daly bolstered UCD's Leinster contingent, and it was Daly's brilliant surge through the heart of the hosts' defence that led to Timmins' ninth-minute score.

Foley, a key figure for Cistercian College Roscrea in their Leinster Schools Senior Cup triumph in 2015, converted and added a penalty soon after for 10-0.

A Jack McDermott penalty, 25 minutes in, got Dublin University up and running, and although an extended spell of pressure saw McDermott split the posts again, two more penalties from the assured Foley had UCD 16-6 ahead at the interval.

Trinity's Ireland Under-19 full-back Colm Hogan notched a terrific individual try in the 53rd minute to set up a nail-biting finish. Hogan cleverly chipped over the top and won the race to the bouncing ball, with McDermott's kick making it 16-13.

McDermott missed a 71st minute penalty from a tricky angle and Foley was also wide at the other end, as the tension increased both on the pitch and off it.

It was UCD who had the final say thanks to their captain Jamie Glynn, who came on as a replacement for Leinster scrum half Nick McCarthy. Glynn finished off a prolonged attack with a try under the posts, converted by Foley for a 10-point winning margin.

Much-fancied Old Belvedere fell to a 13-11 defeat at the hands of Garryowen in a closely-fought contest at Anglesea Road.

Shane McDonald, who deputised for the absent Daniel Riordan at full-back, had responded for 'Belvo just before the break, running in his third try in the space of a week.

A well-struck penalty from number 10 Willie Staunton, five minutes into the second half, should have seen the Dubliners push on, but Garryowen, back-boned by a superb defensive performance, had the measure of them in the end.

Cronin and Staunton swapped penalties before the former drilled over the match-winning three-pointer with little over ten minutes remaining.

The result saw Garryowen get one over on their former head coach Paul Cunningham who fielded three ex-Light Blues in the 'Belvo pack - front rowers Ed Rossiter and Declan Lavery and newly-signed number 8 Dave Sherry. 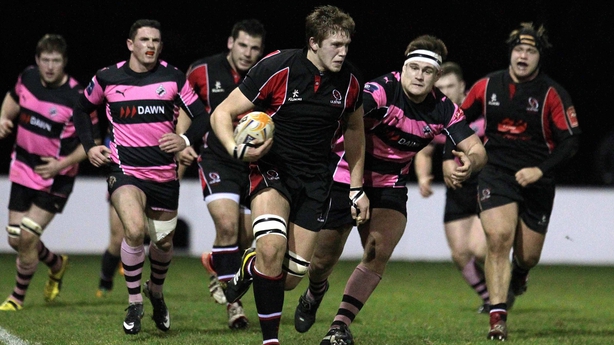 Number 8 Rea was part of a strong pack that including fellow provincial players John Andrew, Kieran Treadwell and Stephen Mulholland, while Mark Best and Dave Shanahan both started behind the scrum.Naas, who edged out Galwegians at home last week, played second fiddle to Ballymena in the first half, with tries from flanker Mulholland and classy centre Best giving Andy Graham's men a 15-3 interval lead in wet conditions.

Out-half Peter Osborne's 29th-minute penalty from Naas' first incursion into Ballymena territory was the visitors' only score until the hour mark.

A tremendous break from player-coach Johne Murphy created the opening for full-back Fionn Higgins to touch down out wide with 61 minutes gone.However, a subsequent leg injury suffered by Higgins held the game up for over half an hour.

The teams resumed to play out the final nine minutes, with the Braidmen relatively untroubled in seeing out their second league win of the new season.

A strong second-half display inspired Buccaneers to their first win of the campaign, as they ran out comfortable 27-3 winners over Shannon in Athlone.

Brett Wilkinson's men bounced back from a heavy defeat to Ballynahinch with this bonus point success, aided by two tries from their number 8 and captain Kolo Kiripati.

They led 10-3 at the turnaround, winger Rory O'Connor going in under the posts in the 28th minute with Connacht's Conor McKeon, who has made the move to scrum half, converting to add to his ninth minute penalty.

A lone Conor Fitzgerald place-kick proved to be Shannon's only score on a disappointing afternoon for Marcus Horan's side.

They suffered two sin-binnings and Buccs broke clear in the third quarter, Kiripati storming over from close range in the 41st minute and quick lineout ball, just five minutes later, was moved wide for winger Jordan Conroy - a league debutant last week - to touch down.

The bonus point was pocketed by the Pirates in the 70th minute. Off a solid scrum platform, Kiripati picked off the base to score in the corner and give his team a timely boost ahead of next Saturday's trip to Division 1B newcomers Naas.

Galwegians erased UCC's early 11-point lead to chalk up their maiden win of the season, notching five tries in a 31-14 triumph at Crowley Park.

Brian McClearn's charges were staring at a second successive defeat when wind-backed UCC scored 11 points in as many minutes, Kevin O'Keeffe booting two penalties and fellow winger Cillian Ansbro dotting down in the corner after a fine run by lock Darragh Moloney.

Despite Byrne and prop Jason East being forced off in the second quarter, centre Cormac Brennan dummied his way through for the hosts' second try and a 12-11 half-time lead.

The Cork students stayed in the hunt despite leaking a 57th-minute bonus point score to 'Wegians replacement prop Conor Carey, who signed for Connacht last March. But the result was put beyond doubt by a closing try from full-back Aidan Moynihan which Lam converted.

Old Wesley marked the opening of their new pavilion and clubhouse at Donnybrook with a two-try dismissal of Dolphin.

Taoiseach Enda Kenny and IRFU President Stephen Hilditch were both present for the official ceremony before Morgan Lennon's Wesley side took to the 4G pitch to make it two wins from two.

Following up on last week's hard-fought three-point victory at UCC, the hosts scored 18 unanswered points in the first half with Paul Harte bagging a brace of tries to add to his second half effort in Cork.

The left winger stepped through a gap to score by the posts, adding to an initial penalty from Barry McLaughlin.

A second three-pointer followed from the latter, before fast-breaking Kiwi centre Isaac Leota sliced open the Dolphin defence and provided the assist for Harte's second try of the afternoon.

David Corkery's half-time team talk had the desired effect as Dolphin immediately hit back with a Cillian Monahan penalty, and further indiscipline from Wesley allowed the Corkmen to enjoy more possession and territory.

McLaughlin kept the home side on course with a central penalty from outside the Dolphin 22. Yellow cards in the final quarter for props David Henshaw (scrum) and flanker Stephen Boyle (offside) put Wesley under increasing pressure, and from a tap penalty, Dolphin got over for a late consolation try through blindside Barry Fitzgerald.

UL Bohemians had another sensational day at the office, running six tries past a highly-rated Ballynahinch side to move two points clear at the top of Division 1B.

Christy Neilan's team claimed their second try-scoring bonus point in as many games with right winger Jamie McNamara scoring two of their impressive haul against 'Hinch, who dropped down from Division 1A last season.

'Hinch certainly missed the influence of Ulster's Sam Windsor and captain Mike Graham, and they were left trailing 18-7 by half-time with McNamara, number 8 Brian Walsh and out-half Robbie Bourke, who kicked a penalty, all touching down on the UL North Campus 4G pitch.

'Hinch's Ireland Under-20 out-half Johnny McPhillips, who lined out for the first time with ex-Trinity scrum half Angus Lloyd, converted debutant winger Oliver Brown's try which came from a McPhillips grubber kick.

The margin was down to 18-14 after Ireland Sevens international Aaron Cairns touched down in the corner from quick turnover ball.

However, once they got back up to a high intensity and accuracy, Bohs pushed on with a second Bourke penalty and a brilliant try from their own 22 by flanker James Ryan.

A subsequent penalty from McPhillips was cancelled out by a Finbar Aherne intercept effort for 31-17 and UL completed their six-try salvo with a second score from McNamara, set up for the second time by influential full-back Joe Murray.

Had 'Hinch been more clinical with ball in hand, they may have claimed a try-scoring bonus point, but try number three did come before the final whistle. Stuart Morrow split the home defence to tee up his centre partner Jordan Grattan in the dying minutes.