Johnny Sexton marked his first game of the season with 16 points as Leinster won 31-19 at the RDS to end the Ospreys' unbeaten run in the Guinness Pro12.

Sexton converted his own try on the stroke of half-time, adding to an earlier Josh van der Flier effort and a penalty try, to leave the in-form Welsh region 17 points adrift.

A second try from man-of-the-match Van der Flier was cancelled out by Ben John, and the Ospreys gradually lifted their performance on a night that captain Alun Wyn Jones and Jeff Hassler made their 200th and 50th appearances respectively.

The visitors' bonus-point push gathered pace while Sexton was in the sin-bin as replacement Dafydd Howells and James King crossed in quick succession, but their late revival was not enough in the end.

Back for his first game since shoulder surgery in the summer, Sexton clipped over a close-range fourth-minute penalty to reward a Garry Ringrose kick chase. 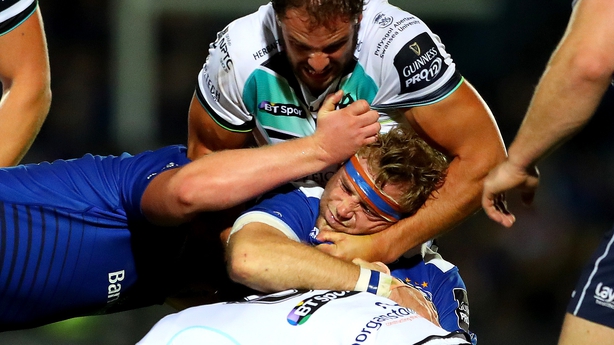 Scott Baldwin won the first of two ruck penalties that briefly broke up Leinster's momentum in attack, but Noel Reid's clever kick got them into scoring range again and excellent flanker Van der Flier clinically drove in under the posts in the 18th minute.

The Ospreys blew a gilt-edged maul opportunity after Isa Nacewa's try-saving tackle on Hassler, before Dmitri Arhip's high challenge on Nacewa in the 25th minute, on the back of repeated infringements, earned the Moldovan prop a yellow card.

Although Luke McGrath had a try in the left corner ruled out for a marginal knock-on from Sexton, the Leinster forwards maintained the pressure and back-to-back scrum penalties, five metres out, resulted in a penalty try for 17-0.

It got even better for Leo Cullen's men when a breathless counter-attacking spell, sparked by Dave Kearney, eventually ended with Zane Kirchner sending Sexton over wide on the left.

The second half was only five minutes old when Van der Flier took a great line off a Sexton pass to slip out of a tackle and then step away from Dan Biggar, with Sexton quickly converting the bonus-point score.

Rhys Webb's knock-on with the try-line in sight summed up a mostly frustrating evening for the Ospreys, and ruined a terrific break from Josh Matavesi.

However, winger John's fourth try of the campaign soon followed, the Ospreys finally getting some reward for their width - something that was so evident in their three previous bonus-point victories.

As Leinster continued to leak penalties, an offside Sexton paid the price with 10 minutes in the bin, and Biggar sent Howells raiding in from close range. Sam Davies' break played in flanker King for their third touchdown, but they were held scoreless for the remainder.