Cardiff Blues edged out Munster 24-23 in a cracking Guinness PRO12 contest that went right down to the wire at Irish Independent Park.

Cardiff were full of running in the first half, carving out a 17-10 lead thanks to Tom James' brace with Andrew Conway answering back for Munster.

An Ian Keatley penalty, followed by a try from replacement Dave Kilcoyne, saw Munster lead 20-17 just past the hour mark, but a tremendous team try - finished by full-back Dan Fish - was enough for the Blues to make it two wins out of two. 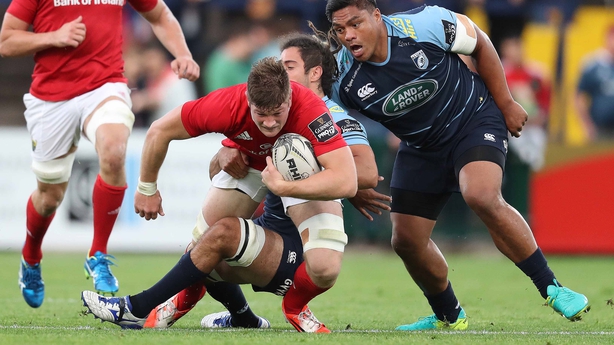 Darren Sweetnam twice came to Munster's rescue in the opening minutes, bundling James and then Cory Allen into touch, but Cardiff's early attacking endeavour was rewarded with a fine eighth-minute try.

Winger James' 50th touchdown for the Blues saw him evade three defenders on a classy run from outside the 22, with Gareth Anscombe quickly converting.

But Munster were level inside two minutes, Sweetnam benefiting from a favourable bounce to brilliantly tidy up a kick and offload for full-back Conway to finish an opportunist seven-pointer.

Anscombe landed the easier of two penalty attempts as the visitors continued to look the part in a fast-paced and entertaining first quarter.

Improved interplay from Munster, with Dan Goggin and Rory Scannell offering more of a threat in midfield, led to Keatley levelling matters at 10-all on the half hour mark.

Obstruction by Gethin Jenkins saw a try ruled out for Ellis Jenkins, but the Blues retook the lead courtesy of James' second effort, the damage being done by a strong surge from centre Rey Lee-Lo who had the Rhymney man up in support.

Just as Munster began to make inroads on the resumption, solid defence from Danny Wilson's charges, who had Josh Navidi in man-of-the-match form, kept the home side out.

After the advancing Goggin was called back for a forward pass, Munster bounced back by winning a 55th-minute scrum penalty which Keatley dispatched through the posts.

The introduction of regular captain CJ Stander and Donnacha Ryan got the Munster pack firing in timely fashion. Ryan won a key ruck penalty and after a series of pick and goes, Kilcoyne burrowed over to the left of the posts with Keatley converting for 20-17.

That proved to be the match winner as although Keatley converted a 72nd-minute penalty, Cardiff ground out a narrow but deserved victory - their fourth ever in Cork and first since January 2013.